Sax Rohmer’s The Mask of Fu Manchu was originally serialized in Collier’s from May 7 to July 23, 1932. It was published in book form later that year by Doubleday in the US and the following year by Cassell in the UK. It became the most successful book in the series thanks to MGM’s cult classic film version starring Boris Karloff and Myrna Loy that made it into theaters later that same year. The fourth and final part of the book opens with the voyage from Cairo to London. The Marconi operator brings Shan Greville a telegram from Sir Denis Nayland Smith of British Intelligence warning him that agents of Dr. Fu Manchu will attempt to capture the relics of El Mokanna that Sir Lionel Barton unearthed during his recent expedition in Persia. The irascible parliamentary minister who argued with Sir Lionel before boarding the ship turns out to be the agent of the Si-Fan who breaks into the purser’s safe overnight and absconds with the box he believes contains the priceless relics. He is rescued at sea by a plane which takes him and the contents of the box (concealed inside an inflatable rubber ball) aboard and disappears into the night. This is a curious development on Rohmer’s part for while he is to be applauded for casting an Englishman as the villainous agent rather than an Asian, Greek, or Egyptian, the choice of disguise is a ridiculous one. Sir Denis quickly determines that there is no such parliamentary minister after cross-checking the passenger list. He wires Greville to have the man arrested as a spy. Greville inexplicably decides to ignore these instructions until morning thus allowing the theft to occur. Rohmer had already telegraphed to the reader that the box in the purser’s safe was a decoy and the true relics were hidden in plain sight in Greville’s cabin thus robbing the entire episode of all drama. Regrettably, Rohmer had painted himself into a corner. There was no other character to unmask than the MP if he was to advance the plot quickly enough. He had previously shown Sir Lionel trick Fu Manchu’s agents with decoys earlier in the story. Two such deceptions would clearly try readers’ patience and so Rohmer was forced to cut corners resulting in a sloppy resolution to what should have been a suspenseful passage. As it stands, it is a rare flaw that is found late in an otherwise excellent story. TO CONTINUE READING THIS ARTICLE, PLEASE VISIT THE BLACK GATE ON FRIDAY.
Posted by William Patrick Maynard at 5:30 PM No comments:

Sax Rohmer’s The Mask of Fu Manchu was originally serialized in Collier’s from May 7 to July 23, 1932. It was published in book form later that year by Doubleday in the US and the following year by Cassell in the UK. It became the most successful book in the series thanks to MGM’s cult classic film version starring Boris Karloff and Myrna Loy that made it into theaters later that same year. The third part of the book sees Sir Denis Nayland Smith, Dr. Petrie, Sir Lionel Barton, and Shan Greville make their way to the Great Pyramid where Sir Lionel will hand over the relics of El Mokanna to Dr. Fu Manchu in exchange for the release of his niece, Rima who is being held hostage. Sixty Egyptian police officers are employed to surround the Great Pyramid in an effort to bring Fu Manchu to justice and to aid the others in the event they are walking into a trap. Sir Denis insists that Petrie and Barton stay behind while he and Greville make their way to the King’s Chamber, the arranged meeting place. Rohmer wrings every last bit of suspense from Smith and Greville’s descent into the King’s Chamber. Having actually made the journey himself prior to writing the book enabled him to perfectly capture the claustrophobic anxiety of his heroes’ predicament. Upon arriving in the King’s Chamber, they find Dr. Fu Manchu awaiting them. The fact that he handles the matter in person without any bodyguards emphasizes the new strength and confidence with which Rohmer has imbued the character now that he has at last perfected the elixir vitae. Of course, the most important quality to Fu Manchu is integrity and, as always, he is a man of his words. He hands over Rima, unharmed and allows them to leave with her while he takes possession of the relics. Sir Lionel is relieved to find his niece safely returned and is elated at the thought of Fu Manchu alone and surrounded, but Sir Denis knows only too well that they have no hope of capturing him. TO CONTINUE READING THIS ARTICLE, PLEASE VISIT THE BLACK GATE ON FRIDAY.
Posted by William Patrick Maynard at 9:25 PM No comments: 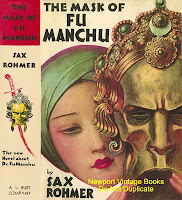 Sax Rohmer’s The Mask of Fu Manchu was originally serialized in Collier’s from May 7 to July 23, 1932. It was published in book form later that year by Doubleday in the US and the following year by Cassell in the UK. It became the most successful book in the series thanks to MGM’s cult classic film version starring Boris Karloff and Myrna Loy that made it into theaters later that same year. The second part of the book sees Sir Denis Nayland Smith of British Intelligence, the renowned archaeologist Sir Lionel Barton, his foreman (and the book’s narrator) Shan Greville, and the expedition’s photographer Rima Barton (Sir Lionel’s niece and Shan’s fiancée) make their way from Ispahan to Cairo where they are reunited with Dr. Petrie, Sir Denis’ oldest friend (and the narrator of the first three books in the series). Learning that Dr. Fu Manchu is behind the El Mokanna uprising that has already spread to Egypt, Petrie is relieved that his wife is safely visiting her in-laws in Surrey at present. While Petrie drives the group into town, an incident occurs where it appears Petrie has struck a pedestrian. An angry mob resentful of the British colonialists soon gathers. While Petrie examines the victim and concludes the man had been dead three hours before his corpse was pushed in front of Petrie’s car, Sir Lionel is nearly abducted. The aim of the accident was to get at the large trunk he carries with him containing the relics of El Mokanna’s tomb from his recent excavation in Persia. The timely arrival of the colonial police is all that saves them from the enraged mob. TO CONTINUE READING THIS ARTICLE, PLEASE VISIT THE BLACK GATE ON FRIDAY.
Posted by William Patrick Maynard at 10:32 AM No comments:

Blogging Sax Rohmer’s The Mask of Fu Manchu – Part One 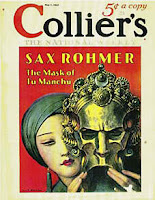 Sax Rohmer’s The Mask of Fu Manchu was originally serialized in Collier’s from May 7 to July 23, 1932. It was published in book form later that year by Doubleday in the US and the following year by Cassell in the UK. It became the most successful book in the series thanks to MGM’s cult classic film version starring Boris Karloff and Myrna Loy that made it into theaters later that same year. Paramount’s option on the character had been exhausted after three pictures and one short starring Warner Oland as the Devil Doctor. The Paramount series had been responsible for Rohmer’s decision to revive the character with Daughter of Fu Manchu. The Mask of Fu Manchu served as a direct sequel and was again narrated by Shan Greville.

The novel gets underway with the brash Sir Lionel Barton having recently joined a colleague, Dr. Van Berg in completing an excavation of the tomb of the notorious heretical Masked Prophet of Islam, El Mokanna in Persia. Shan Greville, Sir Lionel's foreman, is awakened in the middle of the night by his fiancée Rima Barton, Sir Lionel’s niece, who was disturbed by a strange wailing. Upon investigating, Dr. Van Berg is found dead in his room, his bloodied corpse slung over the jade chest containing the artifacts from the dig. The artifacts, still intact, are El Mokanna’s gold mask that hid his disfigured features, his heretical New Creed of Islam carved on gold tablets, and the bejeweled Sword of God with which the messianic prophet planned to conquer the world.

Sir Lionel and his party are informed by the authorities that El Mokanna still has fanatical followers in Persia and that a new imam has risen to prominence and is seeking the treasures they foolishly recovered in defiling the Masked Prophet’s burial place (something no Moslem would dare to have disturbed). Worse still, this new imam is believed by the cultists to be the resurrected El Mokanna. Soon enough Sir Denis Nayland Smith arrives on the scene. While Greville is relieved to see him, he is puzzled why Scotland Yard is involved. Sir Denis informs him he retired from the Yard six months ago to accept a post with British Intelligence. Smith is concerned that Sir Lionel’s actions will result in an uprising that will threaten the stability of the Near and Far East.

TO CONTINUE READING THIS ARTICLE, PLEASE VISIT THE BLACK GATE ON FRIDAY.
Posted by William Patrick Maynard at 8:05 AM No comments:

Sir Denis Nayland Smith is the largely unsung protagonist of all of Sax Rohmer’s novels and stories featuring the notorious Dr. Fu Manchu. The brilliant Chinese criminal genius constantly overshadowed the stalwart British subject who did his best to route his megalomaniacal schemes over the course of thirteen novels and four shorter works published between 1912 and 1959. The legendary villain overshadowed Sir Denis to such a degree that many readers were unaware that the author showcased Smith without his customary nemesis in three short stories published between 1920 and 1932.

When Rohmer created the character a century ago, Smith was depicted as a colonial administrator stationed in Burma granted a roving commission by the Home Office to bring Dr. Fu Manchu to justice. His childhood friend, Dr. Petrie played Watson to Smith’s Holmes chronicling his adventures for posterity and ably assisting him wherever possible. Petrie’s job was made easy in as much as Smith rarely did any actual detecting. The duo generally reacted to Fu Manchu’s latest atrocity and then spent the rest of the book trying to anticipate his next move, check him, be captured, escape, inevitably leading a daring raid that would end in something less than a complete success. Despite it all, Smith and Petrie persevered and when Rohmer ended the initial run of the series in 1917, readers likely expected they had heard the last of Nayland Smith’s exploits. Rohmer, however, was too fond of the character to let him retire peacefully.

TO CONTINUE READING THIS ARTICLE, PLEASE VISIT THE BLACK GATE ON FRIDAY.
Posted by William Patrick Maynard at 7:03 AM No comments: