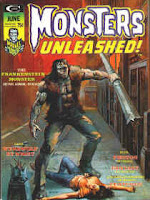 The 19th Century adventures of Mary Shelley’s famous monster conclude with Issue 12 of Marvel’s The Frankenstein Monster as the new creative team of writer Doug Moench and artist Val Mayerik begin the drastic process of updating the series to the present-day.
The Monster is dying of a gunshot wound inflicted by Vincent Frankenstein in the previous issue. After surviving an attack by a pack of wolves, the Monster falls off a cliff into an icy river. The story then jumps ahead to 1973 as an oil freighter hits an iceberg containing the frozen body of the Monster. This being a comic book, the Monster never died of his gunshot wound since the ice preserved him in a state of suspended animation.
The sailor who spotted the Monster trapped in the ice has a brother who runs a carnival. They conspire to steal the body before it can be turned over to the authorities. We are then introduced to a young neurosurgeon, Dr. Derek McDowell who sees the Monster exhibited at the carnival and correctly concludes that it is the immortal creation of Victor Frankenstein.
From here we segue to the pages of Marvel’s more mature (as in free of the censorship imposed by the Comics Code Authority) comic magazine, Monsters Unleashed which first launched the Frankenstein 1973 feature in their second issue the preceding year under the aegis of Gary Friedrich and John Buscema. The events of The Frankenstein Monster # 12 would now be considered an example of ret-conning in order to retroactively satisfy the continuity established in the sister magazine.

TO CONTINUE READING THIS POST, PLEASE VISIT HERE.
Posted by William Patrick Maynard at 5:53 AM No comments:

The 19th Century adventures of Mary Shelley’s famous monster following Gary Friedrich and Mike Ploog’s adaptation of the classic novel continued in Issue 5 of Marvel’s The Monster of Frankenstein with another standalone filler story. This time out it is a more serviceable horror yarn that sees the Monster bravely rescuing a beautiful girl from being burned at the stake. She claims that her town is under the spell of a demon dressed in black that only she could resist. The Monster confronts and subdues her abusive father in his quest to end her persecution. Along the way, there are hints that the girl is not as virtuous as she initially appeared. The Monster learns at the climax that the girl is actually a werewolf. The demon in black is revealed to be the village priest. The story is a familiar yarn having been utilized in numerous other comics and short stories for several prior decades. Gary Friedrich’s script puts the tested story to good use, but this is one of Mike Ploog’s less-inspired issues as artist.
Ploog’s swan song with the series was Issue 6. The title was modified slightly to The Frankenstein Monster starting with this issue. Ploog’s artwork here is simply stunning recalling at times Barry Windsor-Smith’s run on Marvel’s Conan the Barbarian. His Frankenstein Monster also strongly resembles Herb Trimpe’s interpretation of The Incredible Hulk and yet, there is much that is undeniably Ploog’s own brilliant style throughout. This final issue for the artist is his best for the series and does much to underline what made his artwork so beloved by comics fans.
The issue offers the first major plot advancement of the series as the Monster arrives in Ingolstadt and reaches Castle Frankenstein. Unfortunately, Friedrich seems to envision Europe at the end of the 19th Century as still being mired in the Dark Ages. Castle Frankenstein has been taken over by a tyrannical despot known as the Colonel. His Neanderthal servants (they appear to be the same ones seen in the Arctic in Issue 4) are capturing innocent victims from Ingolstadt to feed to the giant spider that lies in the pit beneath the Castle. The Monster joins a heroic Lieutenant in dispatching the Colonel and killing the giant spider. Castle Frankenstein is destroyed in the process as the Monster’s search for Frankenstein’s descendant continues.
TO CONTINUE READING THIS POST, PLEASE VISIT HERE.
Posted by William Patrick Maynard at 3:50 AM No comments:

Marvel’s The Monster of Frankenstein, Part One

Following the success of The Tomb of Dracula in 1972, Marvel Comics launched The Monster of Frankenstein the following year. Gary Friedrich and Mike Ploog kicked the series off with a fairly faithful three-part adaptation of the Mary Shelley novel.

At the outset, Marvel determined to keep the Monster in period. This was an interesting approach considering the modern update Dracula had received. Vampires were an easier sell for the twentieth century as numerous film and television updates had already established contemporary vampire stories whereas the Frankenstein Monster somehow seemed an antiquated concept, despite the character’s ongoing appeal.

It is important to remember that at the time the series debuted, literary critics had not yet embraced Mary Shelley’s work as a classic. Shelley, like Bram Stoker, was looked down upon as low-brow and her work was not afforded serious consideration.

Television syndication of the Universal Frankenstein pictures of the 1930s and 1940s and the character’s transformation into the patriarch on the 1960s sitcom, The Munsters were largely responsible for its longevity. It would be several more years before Shelley’s cautionary tale would gain widespread acceptance as a modern myth whose resonance had not diminished with the dawn of the Industrial Revolution.

TO CONTINUE READING THIS POST, PLEASE VISIT HERE.
Posted by William Patrick Maynard at 5:54 AM No comments:

Mary Shelley’s Frankenstein and the Power of Myth-Making

Mary Shelley’s Frankenstein: or, The Modern Prometheus is a remarkable work. The book had its origin as a ghost story concocted during a weekend gathering of the literati on Lake Geneva. It became the modern myth best reflecting the ethical and moral issues that arise when technology consistently outpaces its maker’s ability to reconcile progress with the established strictures of society. It remains a classic cautionary tale that has lost none of its relevance nearly 200 years since its publication. Despite this fact, it is an intensely personal story with strong autobiographical touches.
Mary Wollstonecraft Godwin was born in the late eighteenth century to outspoken liberal political theorist William Godwin and pioneering feminist Mary Wollstonecraft. Her mother died of complications giving birth to Mary. She grew up revering her parents’ work and was encouraged by it to ceaselessly question authority in any form. At age 16, Mary began an affair with one of her father’s most ardent followers, the poet Percy Bysshe Shelley who was five years her senior and married with small children.
Percy left his wife and family to travel the continent with Mary and her stepsister, Claire. He enjoyed affairs with both young women. Their unconventional living arrangement engendered much public outrage and ostracism wherever they went. Mary became pregnant with Percy’s child, but the little girl died shortly after birth. Mary’s father, who had criticized the institution of marriage in his writings, inexplicably turned his back on his unwed daughter for her licentious behavior.

TO CONTINUE READING THIS POST, PLEASE VISIT HERE.
Posted by William Patrick Maynard at 10:59 AM No comments: