Noir comics have bubbled under the surface for decades. Even the mainstream success of the Dick Tracy newspaper strip failed to bring hardboiled detectives to the forefront of the medium. Batman started off as a noir title before quickly eschewing dark corners for brightly-colored superhero theatrics for decades. TV and movie tie-in’s, usually one-off’s from publishers like Dell popped up here and there but failed to be anything more than curios.

A quick look at Dell’s Peter Gunn one-off from 1959 is a perfect example. The television series was strictly adult fare in its day with a 9:30 PM time slot so it’s strange to see a kid-friendly comic with Pete tracking down a maker of counterfeit postage stamps as the lead story. Dell fared much better with the simultaneous publication of a TV tie-in novel by the author of the Peter Chambers series, Henry Kane. That book managed to aim for a more sophisticated audience than late fifties network television standards would allow making Dell’s dime comic all the more strange in comparison.

The advent of the graphic novel was really the medium that allowed noir titles to flourish. Darker, more adult and frequently self-contained, the graphic novel was the perfect vehicle to bring hardboiled detectives into the graphic medium. Jim Steranko may have been the first to exploit the combination with Red Tide (1976) featuring the adventures of a gumshoe named Chandler in an appreciative nod to the creator of Philip Marlowe. That seminal work was the first graphic noir in the United States, Europe having got the drop on us first.

Raymond Chandler provided fertile ground for graphic novel creators. Chandler’s last book, Playback (1958) was cannibalized from an unproduced screenplay that the author retooled to suit Philip Marlowe. Mysterious Press published the screenplay in book form in the mid-eighties. A French graphic novel imagining the script as the film noir classic it might have been followed a few years later. The graphic novel was later translated back into English and published Stateside by Arcade Publishing in 2006. It is well worth hunting down as a companion to Chandler’s The Blue Dahlia (1946) with Alan Ladd and Veronica Lake and stands as one of the author’s few fully-realized works without Philip Marlowe.

TO CONTINUE READING THIS POST, PLEASE VISIT HERE.
Posted by William Patrick Maynard at 8:18 AM No comments:

Of Joe Gores, Ace Atkins and Wrestling with Hammett’s Legend

The recent passing of veteran mystery writer Joe Gores on the anniversary of Dashiell Hammett’s own death set me thinking about Hammett’s enduring legacy and continuing influence on detective fiction. Gores was born too late to fight for a place in the Holy Trinity of hardboiled detective fiction alongside Hammett’s immediate heirs Raymond Chandler and Ross Macdonald, but the influence of the man who did so much to transform hardboiled fiction was no less strong in Gores’ work. While most commentators would agree that the DKA series was Gores’ crowning achievement, my own preference was for his 1975 novel, Hammett and his last book, 2009’s Spade & Archer.

Gores’ death led me to pick up Ace Atkins’ 2009 novel, Devil’s Garden. Atkins’ book is a semi-fictionalized account of Hammett’s real-life involvement as a Pinketeron operative gathering evidence for the scandalous Fatty Arbuckle trial in 1921. Thirty-five years earlier, Gores had likewise fictionalized Hammett’s Pinkerton days when he immersed himself in real and imagined political corruption in Roaring Twenties San Francisco in his novel, Hammett. When granted the honor of penning a prequel to The Maltese Falcon, Gores later drew heavily on Hammett’s own experiences as a Pinkerton to fill in Sam Spade’s back story.

Atkins has much in common with Gores in that both men are natural writers who can easily make one envious of their prodigious talent and, at times, frustrated that they aren’t quite as perfect as you wish them to be. No matter how many times I’ve read Hammett’s five novels and the posthumous collections of his short fiction, I never cease to be amazed at his perfection. Chandler’s remark that Hammett repeatedly wrote scenes that struck readers as wholly original is not mere hyperbole; it still rings true today despite the endless parodies and imitations. It is also what makes following in his footsteps so difficult.

Hammett sprang forth fully-formed like some real-life Athena. There was no evidence that Edgar Allan Poe’s seminal Dupin stories or Conan Doyle’s Sherlock Holmes mysteries or even Carroll John Daly’s cartoonish exploits of Race Williams had the slightest influence on what Hammett wrote. He fictionalized his own experiences as a private investigator and idealized his Pinkerton boss and surrogate father figure as the nameless Continental Op, hero of most of Hammett’s short fiction and his first two novels, Red Harvest (1928) and The Dain Curse (1929). Hammett’s own self-image began to crystallize in the form of Sam Spade in The Maltese Falcon (1930) and the three short stories that followed and as Ned Beaumont in his masterpiece of crime and politics, The Glass Key (1931) until finally emerging in a scathing self-parody as Nick Charles in The Thin Man (1934). Hammett lost his moral battle and his creative well ran dry, but he blazed out in a glory that still inspires readers to this day and keeps his fiction fresh and involving nearly a century after it was first published.

TO CONTINUE READING THIS POST, PLEASE VISIT HERE.
Posted by William Patrick Maynard at 5:42 AM No comments:

Blogging Sax Rohmer’s The Return of Dr. Fu-Manchu, Part Two: “The Cry of the Nighthawk” 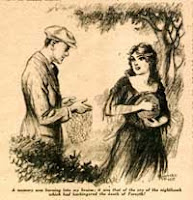 “The Cry of the Nighthawk“ was the second installment of Sax Rohmer’s Fu-Manchu and Company. The story made its debut in Collier’s on December 26, 1914 and was later edited to comprise Chapters 4-6 of the second Fu-Manchu novel, The Devil Doctor first published in 1916 in the UK by Cassell and in the US by McBride & Nast under the variant title, The Return of Dr. Fu-Manchu.

Rohmer’s tale bears definite similarities to his first Fu-Manchu story, “The Zayat Kiss” (1912) in that the story opens with Dr. Petrie at work in his principal vocation caring for a patient called Forsyth who has turned up at his residence late that evening with a badly infected hand. Petrie, in true pulp fashion, fails to recognize that Forsyth is the spitting image of Nayland Smith with a moustache.

Finished with his patient, Petrie goes to his study to find Smith with the lights out staring frantically outside just as he had at the opening of “The Zayat Kiss.” Petrie joins him and they watch poor Forsyth walk to his doom under the elms. They hasten outside after hearing the cry of a nighthawk and retrieve Forsyth’s dead body with its mutilated face. Only then does Petrie realize that Forsyth is Smith’s doppelganger and the duo then deduce that the poor man shared the fate intended for Smith.

Nayland Smith examines the crime scene while Petrie examines the dead man’s fatal wounds. Petrie notes unpleasantly Smith’s cold detachment as he focuses upon the task at hand. His inhuman lack of compassion is reflected in the icy quality that his eyes take on. The description recalls the odd, birdlike opaque film that covers Dr. Fu-Manchu’s eyes in moments of concentration and, indeed, Petrie has cause to repeat the description later in the story. This is yet another way that Smith and Fu-Manchu closely mirror one another. The other way, of course, is the sublimation of all sexual desire to allow for total absorption in their respective obsessions.

TO CONTINUE READING THIS ARTICLE, PLEASE VISIT HERE.
Posted by William Patrick Maynard at 6:23 AM No comments:

Blogging Sax Rohmer’s The Return of Dr. Fu-Manchu, Part One: “The Wire Jacket”

“The Wire Jacket“ was the first installment of Sax Rohmer’s Fu-Manchu and Company. The story made its debut in Collier’s on November 21, 1914 and was later edited to comprise Chapters 1-3 of the second Fu-Manchu novel, The Devil Doctor first published in the UK by Cassell and in the US by McBride & Nast under the variant title, The Return of Dr. Fu-Manchu.

Rohmer displays an admirable economy of writing with this first sequel to Fu-Manchu. The story opens two years after the events of the original serial with our narrator, Dr. Petrie (his first name is never revealed) enjoying the company of his house guest, Reverend Eltham, the soft-spoken English cleric who 15 years earlier did much to provoke the Boxer Uprising as an intolerant missionary in China.

The two men chat amiably about Nayland Smith, who has returned to his post as Police Commissioner in the British colony of Burma. Petrie hasn’t received a letter from Smith in over two months and attributes it to a love affair gone sour that Smith hinted at in his last letter.

Modern readers may be intrigued by Petrie’s refusal to confirm whether the affair was with a woman or not when asked directly and Eltham’s subsequent remark that Burma makes a mess of a man. Add to it Petrie stating that Smith is never likely to marry now and most readers today will almost certainly conclude that Smith has had a homosexual encounter.

However, it should be noted that Petrie reflects the Edwardian reticence to discuss anything remotely intimate even among friends and his discomfort likely has more to do with Eltham’s probing than any dark secret of Smith’s that he is hiding. Petrie makes mention that Eltham is not at all common for a clergyman and his directness is certainly atypical of English social etiquette then as well as now.

TO CONTINUE READING THIS POST, PLEASE VISIT HERE.
Posted by William Patrick Maynard at 5:28 AM No comments: