Return to the Golden Age with Tales from the Hanging Monkey 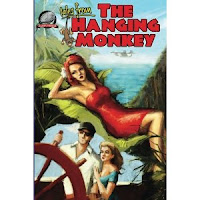 Tales of the Gold Monkey only lasted one season in the early 1980s, but the series has developed a steady cult following in the years since its brief network run. Dismissed as nothing more than an inferior small screen knockoff of the contemporaneous Raiders of the Lost Ark, the series has finally started to earn the recognition denied it at the time. While it took a Hollywood blockbuster to convince network executives to green-light the series, the proposal had been around since the 1970s and the show was conceived, like Raiders, in homage to the serials and classic adventure stories of the past. As much as Republic Pictures cliffhangers were an inspiration and the tall shadow cast by Humphrey Bogart in the classic Treasure of the Sierra Madre undeniably fell upon both properties, the longstanding tradition of South Seas adventures from James Michener’s Tales of the South Pacific to the fondly-remembered Adventures in Paradise series from the Golden Age of Television left an even more indelible mark on Tales of the Gold Monkey. The concept of a bar in an exotic location which serves as a literal and moral crossroads for travelers, expatriates, and fugitives had its roots in Casablanca and Old Time Radio’s nearly forgotten Rocky Jordan series. Tales of the Gold Monkey’s pedigree and neo-pulp credentials establish it as far more than just another Indiana Jones clone as the short-sighted and uninformed wags of the day insisted. Similarly 30 years later, the newly published South Seas adventures anthology, Tales from the Hanging Monkey is more than just an imitation of the 1980s cult series whose title it recalls. The exotic South Seas bar serving as the nexus for the adventures of strangers whose paths would never otherwise cross is present here as much as it was in numerous Golden Age scripts, but Bill Craig has created something enchanting that is at once familiar and pleasingly fresh. The delights of New Pulp works such as this one are similar to discovering an OTR series you’ve never heard of and wondering why it isn’t better known. Craig’s anthology and the stories he and his fellow authors have crafted here are a perfect evocation of the simpler, cleaner, thrilling, unambiguous world of the first half of the last century. There’s an unmistakable sense of innocence and fun about the book that puts you in mind of what your parents or grandparents must have felt when they were young and whiling away a Saturday afternoon in a crowded movie house or sitting before the crackling radio speaker in the front room with the whole family gathered around on a quiet evening. TO CONTINUE READING THIS ARTICLE, PLEASE VISIT THE BLACK GATE ON FRIDAY.
Posted by William Patrick Maynard at 1:31 PM No comments:

The Coming of Dorgo the Dowser

Growing up in the 1970s, the Ballantine editions of Edgar Rice Burroughs’ Tarzan series and the Ace Conan series were part of my steady diet. Seminal pulp fiction graced with stunning cover art by the likes of Neal Adams, Boris Vallejo, and Frank Frazetta. The cover art for the Conan books perfectly captured a bygone savage world that never existed in mankind’s past, but should have. While most Robert E. Howard fans have long since rejected these editions because of the sometimes gratuitous changes made to the original text, the impact of the Conan paperback series on the proliferation of the fantasy subgenre cannot be underestimated.

My own passion for sword & sorcery waned somewhere around the time that Robert Jordan took up his pen to tell bolder and ever more sweeping tales of the Hyborian Age for Tor Books that dwarfed the originals without ever capturing the same sense of wonder. I closed the book on that chapter of my life not long after starting junior high and never expected to revisit it. Flash forward to 2012 when I discovered Mad Shadows: the Weird Tales of Dorgo the Dowser by Joe Bonadonna and found that sometimes you can go home again.

Joe Gill modified Denny O’Neil’s take on the Labors of Hercules when he succeeded him as scriptwriter on Charlton Comics’ Adventures of the Man-God, Hercules in 1968. Gill took the character of Eurystheus that O’Neil referred to as a judiciary member of the pantheon of gods on Mount Olympus and developed the character as a mortal king who is Hercules’ cousin on his mother’s side (Gill actually referred to him as Hercules’ uncle in his first appearance). By Issue #8 it was established that Hercules turns to King Eurystheus to receive each assignment in the remaining five labors he must complete before he is accepted among the gods of Olympus. Eurystheus is portrayed as a mortal puppet of Hercules’ vindictive stepmother Hera, the queen of the gods.

Issue #8, “The Boar” sees Eurystheus set Hercules the seemingly impossible task of capturing the Great Boar of Eurymanthus without injuring the beast. Upon scaling Mount Eurymanthus, Hercules is set upon by yet another pteranodon (a favorite of artist Sam Glanzman, apparently). Perhaps cognizant of the winged reptile’s repetition, Joe Gill provides the explanation that the pteranodons are conjured up from Earth’s prehistoric past by Hera. Zeus berates his wife for this unnecessary persecution of his son. Hercules is warned off his quest by the nearby villagers, but ignores their caution and scales to the top of the mountain and encounters the great boar itself. The man-god tames the beast with relative ease and rides it down the mountain (admittedly, a great visual) to present it to King Eurystheus. The storyline is very slight compared to the previous labors (clocking in at only 12 pages).

The rest of the issue is taken up with a supporting feature, “The Legend of Hercules” which depicts the man-god’s childhood in the home of his mortal mother, Alcmena. The story opens on the domestic life of the infant Hercules and his mortal half-brother, Iphicles. The child Hercules first shows his incredible strength when he slays a pair of serpents that crawl into the toddlers’ crib one night. The script reveals that the serpents were sent by Hera in her jealousy. While closer to the mythological depiction of Hercules’ origin, the incident contradicts the code-approved storyline from previous issues that Alcmena and Zeus were married before Zeus and Hera wed. This was not, of course, Denny O’Neil’s original intent, but Dick Giordano enforced the Charlton Comics editorial policy which prevented dealing with out of wedlock pregnancy as much as it limited any sexual suggestion. This certainly made the depiction of a title capitalizing on the booming sword & sorcery market difficult to say the least.

Blogging Charlton Comics’ Adventures of the Man-God, Hercules – Part One

Charlton Comics’ Adventures of the Man-God, Hercules is unique in actually making a credible stab at being faithful to Greek mythology. The Twelve Labors of Hercules form the backbone of the thirteen issues published between October 1967 and September 1969. Denny O’Neil scripted the first five issues under the unlikely pseudonym of Sergius O’Shaugnessy with Dick Giordano editing the first four issues. When Giordano left Charlton Comics for DC, he took O’Neil with him. Giordano’s successor, Sal Gentile replaced O’Neil with Joe Gill who scripted the final eight issues. The entire run was illustrated by Sam Glanzman, a house regular at Charlton. I first discovered the series via Charlton’s reprint series of the early 1980s. Sadly, the entire run was never reprinted and all thirteen issues can be rather difficult to track down.

The self-titled first issue features an amusing error in which the gods of Mount Olympus set Hercules with nine, rather than twelve labors to prove his worth so that he may take his rightful place among them. This mistake was quickly corrected with the second issue. As the series begins, Hercules’ mortal mother Alcmene has died and her son is frustrated he cannot join his divine father on Mount Olympus. Eurystheus decrees the man-god must perform nine labors before he will be recognized by his fellow gods. The first labor he is assigned is to slay the Nemean Lion. There is a nice twist where his fellow Spartans do not believe Hercules’ claims of being the son of Zeus. King Philip of Sparta puts a price on the man-god’s head for deserting the Olympics to go off on his quest.

When Hercules’ arrives in Nemea, he rescues Princess Helen from Argive invaders who sought to hold her hostage to force Alexander the Great to abdicate. Princess Helen falls for Hercules. Despite their rivalry for Helen’s love, Hercules and her betrothed Alexander fight side-by-side during the dual invasion of the Argive and Corinthian armies and force them to retreat. Helen is prepared to leave Alexander for Hercules until she learns the secret of his divine heritage when she witnesses a conversation between him and Zeus. Hercules sends her back to Alexander choosing eternity over mortal love. He battles and defeats the Nemean Lion barehanded and takes to dressing in its skin. He forms a strong bond with Alexander the Great as he prepares to return home to Sparta.

TO CONTINUE READING THIS ARTICLE, PLEASE VISIT HERE.
Posted by William Patrick Maynard at 8:53 AM No comments: