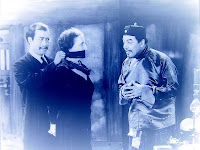 “The Silver Buddha” was the sixth installment of Sax Rohmer’s Fu-Manchu and Company. The story was first published in Collier’s on May 15, 1915 and was later expanded to comprise Chapters 18-20 of the second Fu-Manchu novel, The Devil Doctor first published in the UK in 1916 by Cassell and in the US by McBride & Nast under the variant title, The Return of Dr. Fu-Manchu.

The story sets off at a frantic pace with a desperate Dr. Petrie returning to J. Salaman’s antique shop on Museum Street where he believes he glimpsed Karamaneh in the previous installment. Petrie has foolishly decided to investigate the shop without informing Nayland Smith of his plans.

Posing as an antique collector, he is compelled to handle a silver Buddha that the shopkeeper tells him has already been sold. The statuette in question releases a concealed door and Petrie unexpectedly finds himself face to face with Dr. Fu-Manchu.

Petrie writes of the Devil Doctor’s awesome presence noting the supernatural force that seems to emanate from his oddly opaque eyes (that he likens to both a bird’s and a cat’s once more) that prevents anyone from summoning the courage to attack him. This force that Rohmer emphasizes is undoubtedly the vril he discussed in an earlier installment. Naturally, Petrie’s wonderment at finding himself in the presence of Fu-Manchu comes to a violent end when he is struck on the head and rendered unconscious.

Pulp thrillers, like their literary cousin the hardboiled mystery, have a habit of first person narrators being repeatedly knocked unconscious without ever suffering permanent ill effects or even a fractured skull. Petrie awakens abound captive in Dr. Fu-Manchu’s laboratory. As happened before, Fu-Manchu erroneously believes Petrie to be a genius rivaling his own intellect. He notes that he is preparing to brainwash Petrie so that he can send him back to China to serve the same organization bent on establishing a New World Order based in the East.

TO CONTINUE READING THIS ARTICLE, PLEASE VISIT HERE.
Posted by William Patrick Maynard at 6:39 AM No comments:

“The Coughing Horror” was the fifth installment of Sax Rohmer’s Fu-Manchu and Company. The story was first published in Collier’s on April 3, 1915 and was later expanded to comprise Chapters 14-17 of the second Fu-Manchu novel, The Devil Doctor first published in the UK in 1916 by Cassell and in the US by McBride & Nast under the variant title, The Return of Dr. Fu-Manchu.

The story sees Rohmer return to fine form with Dr. Petrie awakening to Nayland Smith’s strangled cries for help from the room above his. He bursts through Smith’s door in time to hear a strange coughing sound from the window and the crack of a whip before he spies what appears to be a grey-skinned snake retracted from Smith’s neck and pulled bodily out the window as if it were riding a beam of light. Petrie provides much-needed medical attention for his friend has barely escaped this seemingly supernatural assassination attempt.

Interestingly, Smith insists there were small hairy fingers around his throat, but his bed is four feet from the window and no human could have reached him nor is there any explanation for the ghostly sight Petrie glimpsed. Smith was awakened by the sound of the mysterious creature coughing and tried fighting it off. He scratched off a layer of grey hairy skin which he shows to Petrie. They are still puzzled on how to rationally explain these bizarre sights, sounds, and sensations.

Inspector Weymouth has completed a house-to-house search of the East End and is convinced that Fu-Manchu has fled the area. He proceeds to relate the plight of one of his men in the East End, Burke who is now in hiding on his cousin’s farm. Burke knows some secret of Fu-Manchu’s and, fearing for his life, has shirked his duty as a police officer. Unfortunately for the man, Karamaneh has located him and he has subsequently twice scared off a coughing creature that went on all fours and attempted to enter the farmhouse by night. Smith tells Weymouth about his own experience with the coughing horror and the trio resolves they must hasten to the farmhouse that night in an attempt to save Burke’s life. 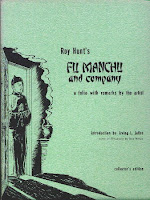 “The White Peacock” was the fourth installment of Sax Rohmer’s Fu-Manchu and Company. The story was first published in Collier’s on March 6, 1915 and was later expanded to comprise Chapters 11-13 of the second Fu-Manchu novel, The Devil Doctor first published in the UK in 1916 by Cassell and in the US by McBride & Nast under the variant title, The Return of Dr. Fu-Manchu.

The story gets underway with Dr. Petrie scouring the criminal district of Whitechapel Road with its Jewish hawkers and crowds of Poles, Russians, Serbs, Romanians, Hungarians, Italians, and Chinese immigrants. Petrie notes that he never sees a face wholly sane or healthy among these underworld denizens he terms “a melting pot of the world’s outcasts.”

The reader quickly learns that Nayland Smith disappeared the previous night having set out in search of Shen Yan in Limehouse. Inspector Weymouth and his men are searching frantically for some sign of Smith. Consequently, Petrie’s paranoia (and xenophobia) is increased dramatically with the disappearance of the friend he holds above all others and who personifies the British Empire and Petrie’s sense of stability.

Petrie meets up with Inspector Ryman at the police station and learns they have already begun dragging the Thames in search of Smith. Petrie learns that Weymouth raided Shen Yan’s when Smith failed to emerge after entering the gambling house. No sign of either Smith or Burke, the American detective that accompanied him or of Shen Yan has been found.

Distraught, Petrie wanders alone along the wharf when he is startled by an eerie call. Narrowly recovering his balance before plunging into the Thames, he discovers and captures a white peacock whose presence on the wharf is seemingly inexplicable. 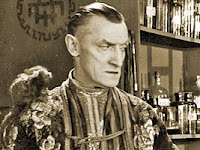 “The Avenue Mystery” was the third installment of Sax Rohmer’s Fu-Manchu and Company. The story was first published in Collier’s on February 6, 1915 and was later expanded to comprise Chapters 7-10 of the second Fu-Manchu novel, The Devil Doctor first published in the UK in 1916 by Cassell and in the US by McBride & Nast under the variant title, The Return of Dr. Fu-Manchu.

While I hold political correctness in contempt recognizing it to be censorship under a different guise, it is inevitable that in revisiting books or films of the past one encounters racial or sexist stereotypes that are now offensive. I do not support banning a work or editing for content anymore than I support minimalizing the issues raised by their inclusion. A simple disclaimer noting offensive content is contained that reflects acceptable attitudes at the time of the work’s creation should suffice to address the matter.

Readers of pulp adventure or mystery fiction of the late nineteenth and early twentieth century are accustomed to offensive stereotypes of Asian, African, Italian, Greek, and Jewish characters among others. While Rohmer’s early Fu-Manchu stories contain a good deal less racial stereotyping of Asians than film adaptations or illustrations of the character would suggest; a lamentable streak of anti-Semitism runs through “The Avenue Mystery.” This fact is all the more regrettable because the Jewish character in question, Mr. Abel Slattin ranks among Rohmer’s finest bit players.

Slattin is a private eye, although Nayland Smith credits him as “little more than a blackmailer.” He agrees to pass information concerning Fu-Manchu in exchange for Smith’s offer of one thousand pounds provided Smith first drafts a legally-binding contract. Slattin is bold and clever and terribly amoral. Slattin is an assumed name, his real surname is Pepley and the CID’s records reveal him to be a disgraced American police officer.

Along with the emphasis on his Semitic appearance and resulting negative personality traits, Abel Slattin is delineated by the walking stick he carries that is adorned with the semblance of an adder. A curio he picked up in Australia, Slattin claims (in fact, Rohmer lifted the walking stick from Guy Boothby’s Dr. Nikola series) that it is rumored to be the Biblical Rod of Aaron.

TO CONTINUE READING THIS POST, PLEASE VISIT HERE.
Posted by William Patrick Maynard at 6:07 AM No comments: