A Halloween Treat: The New Death and Others by James Hutchings 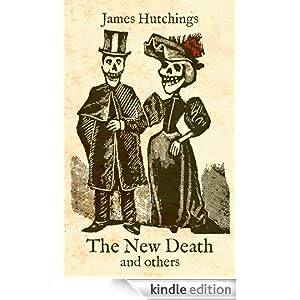 The New Death and Others is James Hutchings’ newly-published collection of gothic poetry and short fiction. The title found its way to me through my appreciation of Robert E. Howard’s “The Mirrors of Tuzun Thune” for it is one of four fantasy stories that the author adapts in verse form. I admit to being skeptical that the quality would not come even close to doing justice to the works that provided inspiration. When I read Hutchings’ poem, I found myself recalling Tolkien’s use of poetry throughout The Hobbit and The Lord of the Rings. Here was a similar approach that uses the beauty of words sparingly to convey complex stories or histories in minimalist form. Hutchings’ work immediately captured my imaginations and left me hungry to sample more of his work.

I humbly admit to struggling with technology. Many are the times I require my kids’ assistance to navigate through the DVD’s remote in order to access special features or skip chapters or fast forward properly. The idea of owning an eBook is something that appeals to me as much as owning an iPod or iPhone. That said Amazon has made it hard for me to resist the technology with their free PC for Kindle download. As a reviewer, there are an increasing number of publishers who prefer to send their works as an eBook. The freeware allows readers to enjoy numerous free classics as well as sample other works for literally a fraction of their printed cost and without having to buy an expensive Kindle or Nook. All of this is actually relevant since Mr. Hutchings’ excellent offering is available at Amazon as an eBook or direct from Smashwords’ website for download. Quite honestly, I cannot think of a more perfect Halloween gift than this collection of poems. One could easily see the book becoming a seasonal tradition.

Behind the Mask: Dr. Phibes Rises Again from Script to Screen 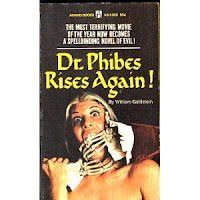 Dr. Phibes Rises Again (1972) brought back Vincent Price and director Robert Fuest for a second go-round with AIP’s favorite madman. Phibes’ original screenwriters William Goldstein and James Whiton penned the first draft of the sequel entitled The Bride of Dr. Phibes. While the resulting film retained significant elements from this work, AIP chose to hand the writing chores to Robert Blees with director Robert Fuest making final revisions on the produced script. Whiton and Goldstein’s sequel script would resurface several times over the years for AIP as a possible third film titled Phibes Resurrectus and later for AIP’s successor, New World Pictures for a revival titled Phibes Resurrected. Between these attempts, Goldstein came very close to getting a television series, The Sinister Dr. Phibes off the ground with comic book legend Jack Kirby providing the designs for the network presentation. A survey of the development of the sequel makes the film’s international title, Frustration seem all too apt.

The October 1971 draft of The Bride of Dr. Phibes makes it evident that Goldstein and Whiton (like many screenwriters before and since) were cheated of a story credit for the sequel since much of the resulting film’s structure is derived from their unproduced script. Phibes’ carefully planned resurrection and his scheme for reanimating his late wife are exactly as one finds in the finished film. Additionally, the central characters of Emil Salveus and his mistress Daphne Burlingame are virtually identical to the film’s central characters, Jonathan Biederbeck and Diana Trowbridge. Goldstein and Whiton focus the sequel on the Institute for Psychic Phenomenon which houses a Satanic cult led by the now adult Lem Vesalius seeking vengeance against Phibes nine years after the events of the first film. The Scotland Yard stalwarts, Trout, Schenley, and Crow return to good effect. Although Crow’s role seems better suited to his direct report, Waverley who is missing here. There’s a gripping scene set at Wembley Arena that recalls a similar sequence in one of the early Fantomas novels where the detectives think they’ve nabbed Phibes only to discover it is one of his automatons. It is obvious to understand why this script would not die and resurfaced several times under variant titles

TO CONTINUE READING THIS ARTICLE, PLEASE VISIT HERE.
Posted by William Patrick Maynard at 7:08 AM No comments:

Behind the Mask: The Abominable Dr. Phibes from Script to Screen 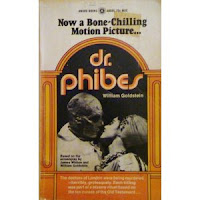 The Abominable Dr. Phibes (1971) starring Vincent Price has long been one of my favorite films. I re-visit it once or twice each year and it always retains a freshness and vitality that separates it from other movies that I love. When asked to explain why it resonates with me to such a degree, I would invariably state that it is the perfect mix of horror and comedy. It never descends into the level of a spoof, but it has a delightfully anachronistic and intentionally offbeat bent with its art deco sets, lurid murders, campy score, and over-the-top performances. The film is a valentine to the mystery fiction of Edwardian England that saw the transition from Sherlock Holmes to Dr. Fu Manchu, but filtered through modern sensibilities that delight in the sensationalistic villainy and the preposterousness of detectives matching wits with murderers as if they were schoolboys playing a game.

While all of the above is certainly true, my attraction to the material runs deeper. Viewing the film as a valentine to Edwardian thrillers sparked a thought about Halloween. For most, it is a time for children to play dress-up and collect candy from their neighbors, but there is another side to the holiday that is decidedly grim. Halloween also evokes sadness and tragedy, lost love, memories of happiness never to be reclaimed, it is fitting it is an Autumnal holiday for it is a celebration of the bittersweet and the tragic. I suspect that is the root of what leads some adults to still cling to the Classic Horror films of the last century before horror became synonymous with splatter films and torture porn. Horror used to be reflective of unfortunate lives, lamentations of those cursed or forsaken. That association is still strong for those who are out of step with the world around them and feel separated from the rest of the world by the weight of their pain. Halloween and Classic Horror are a remembrance of our painful pasts that we transfer to entertainments depicting others’ pain and torment.


TO CONTINUE READING THIS ARTICLE, PLEASE VISIT HERE.
Posted by William Patrick Maynard at 9:02 AM No comments: 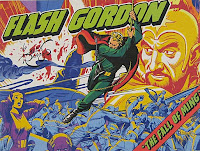 “The Fall of Ming” was the fifteenth installment of Alex Raymond’s Flash Gordon Sunday comic strip serial for King Features Syndicate. Originally published between January 19 and June 29, 1941, “The Fall of Ming” picks up the storyline where the fourteenth installment, “The Power Men of Mongo” left off with Flash having reached the gates of Ming’s concentration camp in a daring attempt to rescue Zarkov and the other political prisoners held there. Bulon is just about to assassinate Flash when he is captured by Ming’s guards. The traitor quickly reveals Flash’s hiding place. Flash barely escapes with his life, but later succeeds in infiltrating Ming’s “death patrol.”

Dale makes a full recovery and learns from Rena that Bulon is plotting against Flash. The two girls defy Ergon’s orders and set out to rescue Flash. Dale is captured by Sergeant Mordo, one of Ming’s patrolmen while Rena manages to escape. Dale is sent to the concentration camp, but Flash soon learns of her arrival and sets out to rescue her.

Alex Raymond again pushes the boundaries of 1940s sensibilities in the panel showing the muscular and unattractive female guards stripping Dale of her clothing. Likewise, his efforts to show the brutality of German concentration camps proves effective on an entirely different level. The camp’s warden Terro is depicted as a monocled Aryan monster (admittedly, Mongo is also filled with other politically incorrect caricatures from insidious Asians to traitorous Semitic characters as was common in the pulp fiction of the era). Raymond shows many of the prisoners with shaved heads, half-starved, and regularly beaten by the abusive warden. He also depicts a nubile young woman with her back being broken on a wheel. Don Moore’s script notes that prison cells are designed to prevent inmates from standing straight or being able to sit or lie down in an attempt to drive them mad. Raymond was obviously outraged by the War in Europe and was doing the best he could to draw readers’ attention to it by making Ming’s heinous actions strongly parallel Hitler’s atrocities that were recounted in newspapers of the day.