Bram Stoker’s Dracula in Comics, Part One – The Novel Adaptations 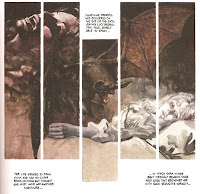 While Bram Stoker’s infamous vampire count has been prevalent in comic books whenever the prevailing bluenoses of each generation have deigned to allow horror books to be printed, there have been surprisingly few attempts to faithfully adapt the classic novel in comic book form.

Classics Illustrated tackled the book shortly before Dr. Frederick Wertham got his dirty little hands on the comic business and did his best to keep the children of the world safe from twisted people just like himself. The Classics Illustrated adaptation was professionally produced, if somewhat anemic. Marvel Comics would later reprint this edition in the 1970s with new cover art to make it appear consistent with Gene Colan’s magnificent portrayal of the character for Marvel’s long-running Tomb of Dracula title. Happily, a superior adaptation was brewing in Marvel’s companion magazine, Dracula Lives.

Roy Thomas and Dick Giordano teamed up to provide a faithful, elegant, and leisurely-paced adaptation of the Stoker novel as an ongoing feature in the black & white comic magazine. Unfortunately, sales were not on their side and the title was cancelled. The one unpublished chapter they had completed turned up in the pages of another magazine title, Legion of Monsters before it too was cancelled. Their masterful adaptation was left incomplete for nearly thirty years.

To Continue Reading This Post, Please Visit HERE.
Posted by William Patrick Maynard at 11:08 AM No comments:

From his first appearance in print in the pages of The Story-Teller in October 1912, Sax Rohmer’s criminal mastermind, Dr. Fu Manchu took the world by storm. While Rohmer would complete three novels featuring the character between 1912 and 1917, the Devil Doctor would extend his domain to include film and comics in the fourteen years before Rohmer bowed to commercial demand and revived the series.

Leo O’Mealia was responsible for adapting Rohmer’s three original novels into a daily newspaper strip, Fu Manchu from 1930 to 1931 while Warner Oland was occupied starring as the character in three feature films and a short for Paramount. Oland, incidentally, was the second screen Fu Manchu following Harry Agar Lyons in the 1920’s. The comic strips were later colored and edited as a back-up feature in the pages of Detective Comics which top-lined a new comic character in the pulp tradition known as The Batman.

Despite the fact that Rohmer went to great pains to make it clear that the Devil Doctor was clean-shaven, the very first magazine illustrators to tackle the character were responsible for grafting upon his terrifying visage the stereotypical Chinese moustache known today as a Fu Manchu.

O’Mealia presented Fu Manchu devoid of facial hair in his daily strip, but in place of Rohmer’s famous description of “a brow like Shakespeare and a face like Satan,” the artist depicted a repulsive hunchbacked gargoyle. The resulting figure is not unlike the monstrous Soviet villains in Jack Kirby’s Cold War-era work for Atlas and Marvel or, for that matter, Kirby’s earlier Golden Age portrayal of hideously inhuman Japanese soldiers in his work for Timely Comics.

Despite the unsettling and dehumanizing portrayal of the titular villain, O’Mealia’s strips are surprisingly faithful to the original text. The exception being the final strips in 1931 which offered a more traditional wrap-up to the storyline than any Sax Rohmer book would ever do.

The most accessible source for sampling Leo O’Mealia’s Fu Manchu strip is Malibu Graphic’s trade paperback collection which features two non-sequential episodes. DC Comics has reprinted several Golden Age issues of Detective Comics which reprint the odd installment of the colored strip, but nothing approaching the full run has ever been reprinted. The one Holy Grail for collectors would be an Australian magazine which dedicated an entire issue to reprinting a sequential storyline. Surprisingly, the internet offers little information on this publication and copies are scarce on the collector’s market making it a highly sought after collectible.

To Continue Reading This Post, Please Visit HERE.
Posted by William Patrick Maynard at 10:14 AM No comments:

Blogging The Insidious Dr. Fu-Manchu by Sax Rohmer, Part Eleven – “The Knocking on the Door” 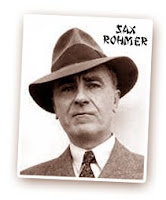 “The Knocking on the Door” was the tenth and final installment of Sax Rohmer’s serial, Fu-Manchu. By the time it was published in THE STORY-TELLER in July 1913, it had already appeared a few weeks earlier in book form as Chapters 27-30 of Rohmer’s first novel, The Mystery of Dr. Fu-Manchu (re-titled The Insidious Dr. Fu-Manchu for its subsequent U. S. publication).

“The Knocking on the Door” starts off with Dr. Petrie and Nayland Smith grieving the terrible loss of Inspector Weymouth. There is little comfort in Weymouth dying a hero despite his having taken Dr. Fu-Manchu with him to a watery grave. The Inspector was denied his dignity during his supreme act of self-sacrifice for he died a victim of Dr. Fu-Manchu’s madness-inducing bacilli.

In his anguish, Nayland Smith gives vent to one of his most hateful pronouncements, “Pray God the river has that yellow Satan….I would sacrifice a year of my life to see his rat’s body on the end of a grapping iron!”

Time and again, it is Nayland Smith and no other character who gives voice to the racist remarks that make contemporary readers squirm in discomfort. Considering that Smith is Rohmer’s imperialist character – a colonial administrator for the Crown – it is likely this was a deliberate decision on the part of the author to paint the character as intolerant in contrast with the narrator who has fallen in love with an Egyptian. As the series progresses, Rohmer’s narrators will frequently enter into interracial relationships in spite of their association with the bitter and misogynistic Smith.

“The Spores of Death” was the penultimate installment of Sax Rohmer’s serial, Fu-Manchu. First published in THE STORY-TELLER in June 1913, it later comprised Chapters 24-26 of the novel, The Mystery of Dr. Fu-Manchu (re-titled The Insidious Dr. Fu-Manchu for U. S. publication).

The story starts off appropriately with our narrator, Dr. Petrie acknowledging the storyline is drawing to a close and apologizing (very nearly breaking the literary equivalent of the Fourth Wall in so doing) for his haste in not better detailing characters and incidents as he was forced to maintain the breakneck pace of the events as they transpired.

Dr. Petrie then spends some much welcome time discussing the mysterious origins of Dr. Fu-Manchu. Petrie suggests the name (ridiculous to modern, informed readers) is an assumed one and disassociates him with the Young China movement (the Republicans who came to power after the fall of the Manchu Dynasty) as he had speculated early on.

The story itself leads the reader on a false trail (as we have seen previously, Rohmer relished violating genre expectations). A raid is conducted on Dr. Fu-Manchu’s Limehouse base of operations where Petrie is reunited with his beloved Karamaneh and her brother, Aziz. Just when the raid begins, Petrie, Nayland Smith, and Inspector Weymouth are forced to watch in horror as the Scotland Yard men walk into a trap in Fu-Manchu’s fungi cellars. As the poisonous spores bring about the rapid and painful death of Weymouth’s men, Dr. Fu-Manchu discards his honorable demeanor and reveals himself as a madman shouting, “They die like flies….I am the god of destruction!”

To Continue Reading This Post, Please Visit HERE
Posted by William Patrick Maynard at 3:00 AM No comments: 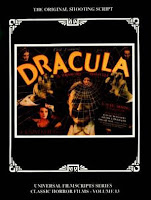 Dracula by Bram Stoker frequently vies with The Maltese Falcon by Dashiell Hammett as my favorite book. Both stories are archetypes of their genres and despite endless imitations, almost every attempt to emulate the originals falls wide of the margin. The current vogue for Twilight and its many imitations may be the worst misinterpretation of Stoker’s classic yet, despite its enviable success among pre-pubescent girls (and their emotional equals). The ignorance of most Twilight fans as to how their heroine earned her first name led me to revisit the seminal Universal Horror, Tod Browning’s Dracula (1931) starring Bela Lugosi in an iconic performance that did much to secure Stoker’s novel its hard-won place of acceptance as a literary classic.
The resulting film owed much to the stage plays which took the West End and Broadway by storm during the Roaring Twenties. Film historian David Skal has gifted the world with several excellent books and DVD bonus features and commentaries chronicling this once untapped goldmine’s transition from page to stage to screen. Film buff Philip J. Riley has done one better (actually twice better) by sharing with film lovers not one, but two volumes collecting the various story treatments and screenplay drafts that were languishing in Universal’s files for decades.