“Marvela” was the twenty-second installment of Alex Raymond’s Flash Gordon Sunday comic strip serial for King Features Syndicate. Originally published between August 20, 1944 and February 4, 1945, “Marvela” was the first Sunday strip completely illustrated by Austin Briggs. Don Moore scripted from a story he developed with the series’ creator, Alex Raymond. This was the final storyline to have any involvement from Raymond. The story picks up following the conclusion of the epic-length Tropica story arc with Flash and Dale traversing Mongo in the triphibian rocket car given to them by Queen Desira as a reward for helping restore her to the throne of Tropica.
“Marvela” marks a strange departure for the strip. Austin Briggs’ artwork, though never a match for Alex Raymond, at least is an improvement on his finishes for Raymond’s rushed pencils that marred much of the second half of the Tropica stories. The title refers to the kingdom that Flash and Dale visit when they see a rocket crash in the forest and a beautiful woman thrown from the cockpit. A giant scorpion appears and moves in for the kill. Flash dives down from the triphibian rocket car to distract the scorpion and he and Dale team up to destroy it. Oddly, Briggs never depicts the rocket falling from the sky or shows its wreckage. Its existence is only referred to in Moore’s script. This should be conclusive proof, if any were needed, that Alex Raymond never layed out any of the early panels for the strip.
TO CONTINUE READING THIS ARTICLE, PLEASE VISIT HERE
Posted by William Patrick Maynard at 4:15 PM No comments:

The storyline picks up where the preceding installment, “Battle for Tropica” left off with Flash and Dale entering the capitol with Tartara and her son, Timor. The cowardly Timor turns Flash and Dale in to the secret police. A gunfight ensues ending in Timor’s death. Flash, Dale, and Tartara manage to elude the police with the aid of Trico, the beggar who poses as a half-blind cripple.
Trico hides the fugitive in his home and when the secret police arrive, searching all the houses in the neighborhood, he serves them poisoned brandy. Flash and Trico disguise themselves in the uniform of the secret police and, along with Tartara and Dale, they follow Trico to Tropica’s hidden criminal underworld from a secret passage built beneath his home. Tartara is reluctant to trust the lowlife criminals. Gypsa, an exotic dancer who is the most desired woman in Tropica’s underworld, performs a wild Saraband dance with Flash. The revelry abruptly finishes when Brazor interrupts with a special broadcast announcing that Desira will be executed for treason the next day.
Flash spurns Gypsa’s advances leading her to secretly swear to even the score with him. Meantime, Flash and Trico drive a stolen police car packed with explosives into the munitions dump, diving for safety just before impact. In the chaos surrounding the explosion, Flash and Trico enter the Tropican Broadcasting building and inform the program director that the secret police have an emergency broadcast concerning the explosion. As Flash goes live on the air, he reveals his identity and tells Brazor he cannot halt the March of Freedom and demands the usurper abdicate. Enraged, Brazor orders the radio station surrounded.

TO CONTINUE READING THIS ARTICLE, PLEASE VISIT HERE.
Posted by William Patrick Maynard at 6:10 AM No comments:

“Battle for Tropica” was the twentieth installment of Alex Raymond’s Flash Gordon Sunday comic strip serial for King Features Syndicate. Originally published between July 18, 1943 and February 6, 1944, “Battle for Tropica” marks the final installment to be completely illustrated by the character’s creator, Alex Raymond. The storyline picks up where the preceding installment, “Fiery Desert of Mongo” left off with the roguish desert chieftain Gundar pledging to aid Flash in restoring Desira to the throne of Tropica. Desira is reluctant to trust the outlaw chief, but Gundar makes it known that he has aspirations of becoming the Queen’s royal consort for his troubles. Meantime, Gundar’s discarded queen, Pequit vows to make sure that Gundar never reach the throne of Tropica.
The group makes a daring nighttime raid on the city of Placida. Zarkov seizes the communications center while Gundar takes the sentries by surprise and informs them that their lives will be spared if they recognize Desira as their Queen. The Mayor of Placida kneels before the Queen and Flash is elated that the first city has fallen without a drop of blood being spilled. The important point, that Don Moore’s script never makes clear, is that the people of Tropica are beginning to learn that the Queen is not an imposter and Brazor is a traitorous usurper. Sentries later inform Flash that Brazor’s aide, Colonel Mogard is leading a fleet of tanks to Placida. Flash has Gundar’s men abandon the city to draw them away, but Mogard gives the order to raze the city to send a message to all who would remain loyal to the deposed Queen.

TO CONTINUE READING THIS ARTICLE, PLEASE VISIT HERE.
Posted by William Patrick Maynard at 10:21 AM No comments: 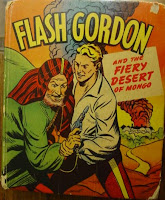 Flash causes an avalanche to delay Brazor’s men. The river of lava and the fire dragon that lurks within menace the fugitives as they proceed into the increasingly unbearable heat of the Flaming Desert. A volcanic eruption nearly finishes them off. Flash escapes to safety by managing a broad jump of over thirty feet. Alex Raymond and script writer Don Moore make the escape from the volcanic eruption a tension-filled drama that makes one forgive the implausibility of Flash’s
near-superhuman feat.