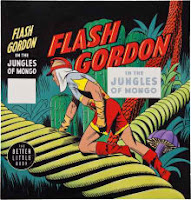 “Jungles of Mongo” was the eighteenth installment of Alex Raymond’s Flash Gordon Sunday comic strip serial for King Features Syndicate. Originally published between June 21 and November 1, 1942, “Jungles of Mongo” picks up where the preceding installment, “Queen Desira” left off with the seductive Queen and a bare-chested Flash riding the local steed, a gryph through the lush jungles of Tropica with Dr. Zarkov and Dale Arden bringing up the rear. Prince Brazor, who has usurped the throne of Tropica from Desira, releases a pack of bloodwolves to hunt them down.
Alex Raymond captures the beauty of Tropica’s flora and fauna with the same care and attention to detail that he demonstrated in some of his earliest Mongo strips. Flash fells a great tree so that the fugitives can travel down the river and, in a move that is now unthinkable, our hero deliberately sets fire to the forest to aid in their escape from Brazor and his bloodwolves. Of course, the cliffhanger nature of the serial demands constant peril and the fugitives quickly find themselves facing the Whirlpool Falls. Zarkov and Dale survive the falls, but Desira (whose top is provocatively torn going over the falls) is sucked into the whirlpool with Flash sharing her fate in his attempt to rescue her. 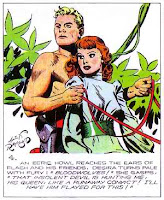 “Queen Desira” was the seventeenth installment of Alex Raymond’s Flash Gordon Sunday comic strip serial for King Features Syndicate. Originally published between January 4 and June 14, 1942, “Queen Desira” gets off to a rollicking start with Colonel Gordon called to a meeting with the Defense Department in Washington DC. The US needs Dr. Zarkov’s ray beams for national defense (a subtle reference to the Second World War that the US had recently entered), but the radium shortage prevents the realization of the project. Flash and Zarkov convince the Defense Department to allow them to build a rocketship to return to Mongo to mine more radium. Flash tells Dale that he is going off on a secret mission, but cannot tell her where. Suspicious, Dale pays a visit to Zarkov and snoops around his house for clues. Confronting him with the truth, Zarkov admits their mission is to return to Mongo. Dale pleads with Zarkov to take her with him and he agrees to smuggle her aboard the rocketship in a trunk.
Reunited at last, Flash is overjoyed to have Dale with him once more. However, they experience electrical problems once in Mongo’s orbit and the rocketship is forced to crashland on the uncharted continent of Tropica. Zarkov is seriously injured in the crash. The three of them are soon taken captive by soldiers and come face to face with the exotic Queen Desira of Tropica. Don Moore expands Flash’s backstory a bit by making the renowned polo player a former college football star while Alex Raymond’s artwork is as stunning as ever. His depiction of Dale in this installment may be the most beautiful rendition yet. Desira is portrayed more in the tradition of H. Rider Haggard’s She or Edgar Rice Burroughs’ La of Opar rather than Raymond’s Princess Aura. Burne Hogarth’s run illustrating the Tarzan strip may be the only serious rival that Raymond had at this juncture. The artwork is absolutely gorgeous throughout.

TO CONTINUE READING THIS ARTICLE, PLEASE VISIT HERE.
Posted by William Patrick Maynard at 9:31 AM 1 comment: 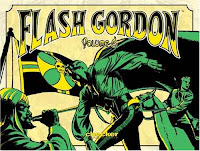 “Return to Earth” was the sixteenth installment of Alex Raymond’s Flash Gordon Sunday comic strip serial for King Features Syndicate. Originally published between July 6 and December 28, 1941, “Return to Earth” is the first storyline following the conclusion of the Mongo storyline that had carried the strip through its first seven years.
The journey back to Earth takes six days. Flash, Dale, and Dr. Zarkov crash land in the Atlantic Ocean and are picked up by a US Navy Destroyer. Rather than receiving the heroes’ homecoming they anticipated, they find they are treated with suspicion. The government fears that they might be Fifth Column agents of the totalitarian Red Sword regime (Alex Raymond’s commentary on 20th Century Fascism) whose aggression has led to a Second World War.
The US War Department agrees to release them in the custody of Zarkov’s former colleague, Dr. Grubich who flies them to his secret mountain retreat where he and his colleague, Dr. Bogan are developing weapons to combat the Red Sword. Zarkov sets to work on designing a new war rocket using scientific advancements he learned on Mongo. Grubich and Bogan assist with the hasty development of the rocket while Bogan’s alluring niece, Olga takes a fast interest in Flash.
It doesn’t take long before Flash has reason to mistrust their hosts. First, he awakens to find a prowler in his bedroom. He shoots the man in the shoulder, but he escapes through the window. Flash follows in pursuit and finds Ivor, the test pilot with a shoulder wound that he claims he received when he struggled with the night watchman who lies dead on the ground. Ivor claims that the night watchman was the prowler in Flash’s room who must have been working for the Red Sword. Zarkov and Dale agree with Flash that they must guard the scientific secrets they have brought back from Mongo even closer.

TO CONTINUE READING THIS ARTICLE, PLEASE VISIT HERE.
Posted by William Patrick Maynard at 7:23 AM No comments:

“The Black Chapel” was the ninth and final installment of Sax Rohmer’s The Si-Fan Mysteries. The story was first published in Collier’s on June 2, 1917 and was later expanded to comprise Chapters 34 - 40 of the third Fu-Manchu novel, The Si-Fan Mysteries first published in 1917 by Cassell in the UK and by McBride & Nast in the US under the variant title, The Hand of Fu Manchu. The US book title marks the first time that the hyphen was dropped from the character’s name, although it was retained within the text.
“The Black Chapel” sees Nayland Smith, Dr. Petrie, and Petrie’s fiancée, Karamaneh (recently liberated from the Si-Fan’s slavery ring) paying a visit to Greywater Park, the ancestral estate that their old friend, Sir Lionel Barton has recently inherited. Rohmer seems determined to shape Greywater Park in the image of Redmoat, the medieval stronghold where Reverend J. D. Eltham (the veteran of the Boxer Uprising who figured in the first two books) resided. As in his appearance in the first book, Sir Lionel is a brilliant, but eccentric Egyptologist based in part on both the real-life Sir Richard Burton and Sir Arthur Conan Doyle’s Professor Challenger. The character’s larger than life qualities are best exemplified by his menagerie of wild cats and other exotic animals that fill his home alongside his equally exotic foreign servants. Upon their arrival, it is learned that Sir Lionel has fallen ill and is unable to meet with them until the morning. The trio settles in for a strange night in Sir Lionel’s highly unorthodox home when they are disturbed by an inexplicable knocking and a ghostly wailing just as Smith has finished relating Greywater Park’s colorful past in housing a Spanish priest who fled the Inquisition centuries before.
As the night progresses, Petrie turns his attention to the abandoned tower, Monkswell that rests on the grounds. He suspects that the ghostly manifestations emanate from there. While staring out the window into the night, Petrie is startled by the shadow of a man crawling down the sheer wall of the castle, bat-like (in a pleasing nod to Jonathan Harker’s glimpse of Count Dracula in Bram Stoker’s 1897 classic, Dracula). Petrie struggles to remain conscious and realizes that someone has drugged his drink with an opiate. Fighting the effects of the drug, Petrie undertakes a search of the East Tower and finds Smith’s room is empty and fears the worst. Convinced that the shadowy figure scaling the wall was Smith’s assassin, Petrie resolves to avenge his friend’s death only to discover the mysterious climber was Smith himself who returns to his room through the window and informs a startled Petrie that Sir Lionel has disappeared.