The Shortcut Man is the recently-published debut novel by P. G. Sturges. The author comes by his talent honestly. I say that not only because his father was the legendary Hollywood filmmaker Preston Sturges, but because he brilliantly channels Raymond Chandler, Jim Thompson and Donald Westlake while managing to deftly stamp his own style on his impressive first effort as a hardboiled mystery author.

Sturges has his work cut out for him. The hardboiled detective genre, while still alive, seems as rooted in the past as a slapstick comedy. Modern practitioners of the art seem determined to evoke past glories more so than speak to their own world. Updating the genre seems impossible short of cynically adding what used to be considered in polite company foul language and graphic sex scenes to the established structure.

It would be dishonest to pretend that Sturges does not do just that here and yet, somehow the book does not feel like a cynical cheat. Partly this is due to Sturges’ gift for great dialogue (simply saying it is in his genes is to do the man discredit for his own talent) and an innate understanding of human nature and our common foibles observing others’ mistakes as well as his own in his nearly sixty years on this planet. There is no mistaking that this book is as much a cathartic autobiography as it is a genuine detective novel.

So let’s get down to business. Who is Dick Henry and why should readers everywhere track down The Shortcut Man? Dick Henry narrates the book. He’s a likable, but flawed guy. Streetwise, but rarely clever as he makes his living as the guy you hire when you need muscle to get rid of a deadbeat tenant or to right wrongs when you’ve been royally screwed over by unscrupulous contractors. Dick is great at solving everyone’s problems but his own. He prides himself on being patient and subtle (the second one is highly questionable) and is certain his ex-wife will take him back eventually and restore him to the kids he’s desperately trying to forget as he disappears down a loser’s alley of arrested adolescence.

TO CONTINUE READING THIS ARTICLE, PLEASE VISIT HERE.
Posted by William Patrick Maynard at 10:17 AM No comments:

The Green Lama made his debut in the April 1940 issue of Double Detective. Conceived by Kendell Foster Crossen as Munsey’s response to the runaway success of Street & Smith’s The Shadow, the character showed surprising longevity despite never achieving the same degree of popularity as his principal rival.

Modern readers would likely find the character an interesting cross between Marvel Comics’ venerable sorcerer, Doctor Strange and their noirish vigilante, Moon Knight. Like the latter, The Green Lama shares multiple aliases/personalities that cut across class lines from millionaire playboy Jethro Dumont to gritty soldier of fortune Hugh Gilmore to Buddhist ascetic Dr. Pali. Like Doctor Strange twenty years later, The Green Lama studied under the tutelage of a Tibetan monk who taught him the secrets of Lamaism. He returned to the United States to fight crime while preaching non-violence and evangelizing for others to follow the path of Buddhism.

As with Doc Savage, The Green Lama is surrounded by a colorful cast of supporting characters from the brilliant Dr. Harrison Valco to the well-educated ex-gangster Gary Brown and his debutante girl friend Evangl Stewart to grizzled Lieutenant Caraway to the Lama’s Tibetan mentor Tsarong to the magician Theodor Harrin to the acting duo of Ken Clayton and Jean Farrell to the mystery woman Magga and the Lama’s chronicler Richard Foster (the pseudonym Crossen used on all of his Lama stories).

Most comic fans are aware that while the Marvel Age of Comics may have begun with the 1961 publication of the first issue of The Fantastic Four, the imprint actually began in 1939 when Timely Comics published the first issue of Marvel Comics with the Golden Age Human Torch on the cover. In the 1950’s, Timely Comics became Atlas Comics who continued to publish Cold War adventures of Timely’s Golden Age favorites as well as horror anthology titles and westerns. Far fewer comic fans recall that Atlas Comics was briefly revived in the mid-seventies as a rival to Marvel under the auspices of estranged family members of Marvel’s publisher and editor-in-chief. They stole Marvel talent and did their best to give the industry giant a real run for its money.

At the time, Marvel had taken advantage of the loosening of the Comics Code Authority and produced the award-winning horror title, The Tomb of Dracula. The dark look and tone of the book combined with the consistently strong scripting by Marv Wolfman and stunning art work by Gene Colan (inked by Tom Palmer) made the 70-issue run of the original series one of the biggest artistic and commercial success stories of the decade. While Marvel has never quite managed to bottle lightning with the title a second time, revivals are frequent while sales of reprints remain strong nearly forty years after the fact.
While the book was busy collecting industry awards for the exceptional talent of its creators and the level of maturity they brought to the title, the newly-revived Atlas Comics prepared their answer in the form of the first and (as it turned out) only issue of Fright featuring The Son of Dracula in the spring of 1975.


TO CONTINUE READING THIS ARTICLE, PLEASE VISIT HERE.
Posted by William Patrick Maynard at 7:28 AM No comments:

The phrase “pulp fiction” has been misused long before Quentin Tarantino appropriated it. For the past several decades nearly all genre fiction of the first half of the twentieth century has been considered pulp when in fact many of its bestselling authors (such as Edgar Rice Burroughs and Sax Rohmer) were published in the better-paying slicks and not the downscale pulps. The writing in the slicks tended to be more polished in sharp contrast to the breakneck pace of the pulps whose authors often hid behind house names and whose primary motivation was packing in as many thrills as possible in each story while still meeting their deadline.

Ravenwood is a typical pulp creation. Nowhere near as successful as Doc Savage or The Shadow, Ravenwood appeared as a support feature in five issues of Secret Agent “X” in 1936. The creation of prolific pulp writer Frederick C. Davis, the character did much to pave the way for the occult crimefighter The Green Lama and was a strong influence on Marvel Comics’ Dr. Strange.

Altus Press collected Davis’ five original pulp stories in a single volume, Ravenwood: The Complete Series published in 2008. More recently, the acclaimed contemporary pulp-specialty publisher Airship 27 revived the character for an anthology of new stories from their talented stable of modern pulp writers. Their Ravenwood, Stepson of Mystery was published in 2010.

The original Ravenwood stories are fast-paced formulaic fun. Ravenwood is the son of Anglo-American parents who died of a fever in what used to be called the Orient at the turn of the last century. The orphaned boy returned to the United States to inherit his father’s estate accompanied by the nameless Tibetan shaman his father had saved from an attacking tiger. The Nameless One, as the aged sage is known, spends his days meditating and burning incense in his penthouse sanctuary. He is a spectral presence dispensing eerily prescient proverbs to Ravenwood (now grown to adulthood and working as a private detective) who turns to the ghostly guru for advice at least once during each case. 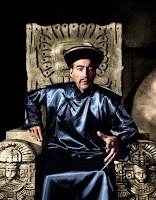 “The Mummy” was the tenth and final installment of Sax Rohmer’s Fu-Manchu and Company. The story was first published in Collier’s on December 4, 1915 and was later expanded to comprise Chapters 31-33 of the second Fu-Manchu novel, The Devil Doctor first published in the UK in 1916 by Cassell and in the US by McBride & Nast under the variant title, The Return of Dr. Fu-Manchu.

Following on from the unbearably suspenseful sadomasochistic tour de force of “The Six Gates,” this final installment of the second Fu-Manchu serial opens with Petrie sleeping securely for the first time in months aboard a ship’s cabin as he crosses the Mediterranean when his rest is disturbed by an urgent telegraph message that has just been received from an unknown destination. The message reads simply, “Dr. Petrie – my shadow lies upon you all.” It serves as a chilling reminder that, though believed dead after being shot by Karamaneh at the conclusion of the next episode, Dr. Fu-Manchu’s servants may yet take vengeance for her betrayal.

No sooner has this fact occurred to them than all concerned are startled by the sound of Karamaneh screaming. They rush to her cabin along with her brother Aziz and find her hysterical after an attempt on her life by an Egyptian mummy she claims entered her cabin through the porthole and attempted to strangle her in her sleep. Of course there is no sign of an intruder anywhere.

Nayland Smith is convinced the telegraph was a ruse to aid the failed attempt on Karamaneh’s life and that a servant of Fu-Manchu, disguised as a mummy, is hiding somewhere aboard the ship. Smith is adamant that the Captain must not be informed of the facts and Petrie must reassure the crew and assembled passengers that Karamaneh is in his care, having recently suffered a nervous breakdown and merely awoke from a bad nightmare screaming so as not to warn the assassin in the hope he is apprehended on his second attempt.


TO CONTINUE READING THIS ARTICLE, PLEASE VISIT HERE.
Posted by William Patrick Maynard at 4:56 AM No comments: