Sax Rohmer’s The Golden Scorpion was first printed in its entirety in The Illustrated London News Christmas Number in December 1918. It was published in book form in the UK the following year by Methuen and in the US in 1920 by McBride & Nast. Rohmer divided the novel into four sections. This week we shall examine the second part of the book, “The Statement of M. Gaston Max” which comprises nine chapters.

Rohmer chose to follow the formula he utilized successfully with The Yellow Claw (1915) by starting the narrative at a crucial early stage before revealing the principal character’s earlier involvement in the plot and then unexpectedly bringing Gaston Max into the proceedings and having him relate, over the course of several chapters, a lengthy background story that helps connect the dots for both reader and protagonist.

TO CONTINUE READING THIS ARTICLE, PLEASE VISIT HERE.
Posted by William Patrick Maynard at 9:16 AM No comments:

Sax Rohmer’s The Golden Scorpion was first printed in its entirety in The Illustrated London News Christmas Number in December 1918. It was published in book form in the UK the following year by Methuen and in the US in 1920 by McBride & Nast. Rohmer divided the novel into four sections which is how we shall examine the book over the next four weeks. “The Cowled Man” is the title Rohmer selected for the first part of the book and comprises the first eleven chapters.

Despite featuring several characters from Rohmer’s 1915 novel, The Yellow Claw, The Golden Scorpion marked a return to the style and feel of Rohmer’s Fu-Manchu thrillers which had concluded the previous year with the publication of The Si-Fan Mysteries (1917). Rohmer maintained the more realistic Limehouse crime novel approach of The Yellow Claw for his contemporaneous Red Kerry detective series which started with Dope (1919), but chose to fashion The Golden Scorpion from the same Yellow Peril weird menace cloth that made his reputation as an author. The key difference from the Fu-Manchu thrillers is that Rohmer maintains a third person narrative voice (as he had in The Yellow Claw) rather than recreating the frantic paranoia that marked Dr. Petrie’s first person narratives.

TO CONTINUE READING THIS ARTICLE, PLEASE VISIT HERE.
Posted by William Patrick Maynard at 9:39 AM No comments: 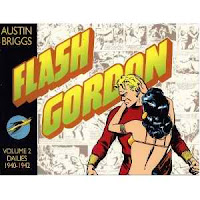 “Freeland” gets underway with the ship bearing our motley crew making its way toward the Promised Land free from Ming. Flash and Dale set out in a rocketship to scout for a safe harbor and encounter a hostile tribe of what appear to be Native Americans. Once more, Austin Briggs demonstrates his version of Mongo is more attuned to contemporary American experience or American history than the prehistoric or Medieval Europe model chosen by Alex Raymond. Briggs may also be borrowing a page from Edgar Rice Burroughs (one of Raymond’s primary inspirations) in transplanting Native Americans to another world.

Having settled in their new home, the crew of the ship Freedom begins exploring the forest and constructing makeshift shelters. While hunting for food, Fierro inadvertently kills one of the natives. Regon, a warrior betrothed to Princess Adora urges the Princess’ father, King Sagam to retaliate. Flash is furious with Fierro because he realizes this has doomed their chance of making peace with the natives.

TO CONTINUE READING THIS ARTICLE, PLEASE VISIT HERE.
Posted by William Patrick Maynard at 7:51 AM No comments: 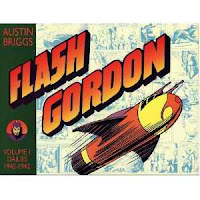 “Princess Lita” was the first installment of Austin Briggs’ Flash Gordon daily comic strip serial for King Features Syndicate. Originally published between May 27, 1940 and February 22, 1941, “Princess Lita” was the story that launched the daily companion to Alex Raymond’s celebrated Sunday strip. It is one of two Briggs strips available in a reprint collection from Kitchen Sink Press. We shall examine the second strip in next week’s column.

The most rewarding part of delving into Austin Briggs’ first two Flash Gordon storylines has been the discovery that the sloppiness of the first few Austin Briggs’ Sunday strips printed a few years after the daily debuted were likely more the result of the artist being overworked than they were an adequate representation of Briggs’ work on the property. “Princess Lita” shows the artist in full command of the material drawing the characters as well as their creator, albeit without the benefit of the Sunday page to showcase the exotic flora and fauna of Mongo to full advantage. The transition from Sunday continuities to a daily strip is jarring at first and the smoothness of Don Moore’s scripting and Alex Raymond’s plotting is sorely missed, but Briggs does an admirable job of staying true to the source material.

Pioneering silent film director, Louis Feuillade rose to prominence with his stylish 1913 serial, Fantomas which faithfully adapted five of Pierre Souvestre and Marcel Allain’s bestselling pulp thrillers. Feuillade next succeeded in fashioning an enthralling original story based around the Apache street gang which figured prominently in the Fantomas series. Les Vampires are led by the vampish Irma Vep, played by the exotic Musidora (France’s answer to Theda Bara). The 1915 serial was hugely successful and was a highly influential work in its day. Feuillade was tasked with the challenge of trying to follow up these two successes with a third commercial property.

Responding to the criticism that his films glorified crime and violence, Feuillade turned to author and playwright Arthur Bernede for help. Together they crafted a pulp vigilante dressed in a dark cloak with his face partially obscured by a slouch hat. Judex, Latin for “judge,” fought crime with his loyal brother, Roger and a menagerie of amazing beasts and an assortment of colorful companions by his side. These and Judex’s gadget-filled secret lair and private plane had a tremendous influence on the burgeoning pulp fiction market in England and America.

The influence on The Shadow is obvious, but the band of strangely gifted companions likely inspired both Bulldog Drummond and Doc Savage as well. Rene Creste (France’s answer to Rudolph Valentino) essayed the memorable title role in the serial. Irma Vep of Les Vampires is the clear inspiration for Judex’s vampish enemy, Diana Monti and quite likely inspired Bulldog Drummond's vampish enemy, Irma Peterson. Musidora played both Irma Vep and Diana Monti in the Feuillade serials. Miss Monti is the fiancée of Judex’s archenemy, Favraux while Irma Peterson is the wife of Bulldog Drummond’s archenemy, Carl Peterson. As always, half the fun of pulp fiction of the first half of the last century is spotting the influences that thread their way through the narratives.

TO CONTINUE READING THIS ARTICLE, PLEASE VISIT HERE.
Posted by William Patrick Maynard at 8:10 AM No comments: