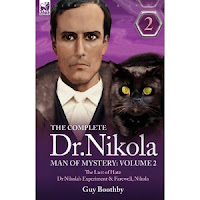 Dr. Nikola is another highly influential Victorian character who has been all but forgotten in the intervening century. The creation of Australian novelist Guy Boothby, Antonio Nikola was one of the earliest examples of a villain granted his own series. Nikola appears in five novels: A Bid for Fortune (1895), Dr. Nikola Returns (1896), The Lust of Hate (1898), Dr. Nikola’s Experiment (1899), and Farewell, Nikola (1901).
Many of the trademarks associated with later criminal geniuses begin with Nikola. Like James Bond’s nemesis Blofeld and his ever-present white Persian cat, Nikola is rarely seen without his black cat Apollyon. Fu Manchu’s pet marmoset Peko is often depicted perched on his shoulder in Sax Rohmer’s thrillers, so Apollyon is regularly described as perching on Nikola’s shoulder.
It is Fu Manchu who owes the most to Nikola. The description of Fu Manchu’s “brow like Shakespeare and face like Satan” finds a parallel in Nikola’s similarly striking features. Nikola is described as having “the Devil’s eyes.”
Even more so, Fu Manchu shares with Nikola an uncharacteristic code of honor that makes these villains somewhat sympathetic in the reader’s eye. Both villains make generous gifts to the individuals they formerly persecuted treating the entire affair as if it was merely a game.
Both Fu Manchu and Antonio Nikola are assumed names and the reader never learns the character’s true identity. Both characters employ dwarf assassins and have laboratories of lethal insects at their disposal. Finally, both Nikola and Fu Manchu studied Lamaism at a Tibetan monastery and seek an Elixir Vitae to grant them immortality.
Despite these similarities, Nikola is far more than a dry run for Sax Rohmer and Ian Fleming’s criminal masterminds for his storyline is unique in that it moves from a tale of revenge to become one of redemption as the series progresses.
Nikola’s life story unravels across the five books as the narrators and the reader learn more and more about the mysterious figure whose appeal persists despite the atrocities he commits.

Like Fantomas before him, Dr. Mabuse is criminally unknown in the United States. The master villain was introduced in Norbert Jacques’ 1922 novel, Dr. Mabuse, the Gambler (also published as Dr. Mabuse, Master of Mystery). Jacques was a French journalist who had immigrated to Germany and wrote the novel as a scathing indictment of the corruption prevalent in the waning days of the Weimar Republic.

Dr. Mabuse is a practicing psychiatrist. He is also an avid occultist who conducts séances and practices Mesmerism. A master of disguise, Mabuse is also the head of a vast criminal empire controlling gambling, drugs, and prostitution throughout the Berlin underworld. Mabuse maintains a stranglehold on both the criminal lower class and the degenerate upper class through their addictions to vice and their reliance upon the occult and psychiatry to direct their lives.

The novel captures much of the corruption and anti-Semitism that were leading Germany on a downward spiral toward Nazism. Mabuse’s surprising ambition is to transform his empire of crime and deception into a utopian dream of a socialist paradise. Jacques saw socialism, the influence of modern psychiatry, and the growing interest in the occult as being as much a threat to Germany as the vice dens that kept the lower classes from rising above their station while simultaneously pulling the upper classes down.

Fantomas is criminally unknown in the United States. Only seven of the original 43 classic French pulp novels are currently in print in English. The series is unique in its successful blend of black comedy and absurdist humor within the traditional murder mystery genre.

Fantomas himself is a criminal anarchist who robs and murders for the sheer joy of creating chaos. While the murders are frequently described in surprisingly grisly detail for their day, they are quickly followed by delightfully sublime escapes or revelations handled with such a deftly light touch that it is impossible not to find the villainous character fun in spite of his many crimes.

Fantomas made his debut in the 1911 novel, Fantomas. The book was an instant sensation whose appeal transcended all barriers of French society. The avant-garde adopted the character as one of their own. Inspired by Gino Sterace’s lurid cover art for the first book, surrealists such as Rene Magritte and Juan Gris, composer Kurt Weil, and poets such as Guillaume Apollinaire and Max Jacob soon incorporated the character in their work.

Fantomas’ appeal to the art world was as strong as the popularity of the books among the working class. The character’s centennial next year will be marked with celebrations in San Francisco, Los Angeles, New York, and Philadelphia in an effort to bring greater recognition to the character and its impact on 20th Century art.

TO CONTINUE READING THIS POST, PLEASE VISIT HERE.
Posted by William Patrick Maynard at 5:10 AM No comments:

The 20th Century adventures of Mary Shelley’s famous monster continued with a guest-star stint in Giant-Size Werewolf #2. Doug Moench scripted and Don Perlin provided the artwork.
Moench gets to make his familiar point about judging by appearances (as he demonstrated several times in his Frankenstein 1974 scripts for Monsters Unleashed) with a nice opening in which a hippie and an African-American are discussing the injustice of unfounded prejudices when they encounter the Monster and immediately flee in terror at his appearance.
The Monster overhears a conversation between two winos about eccentric millionaire Danton Vayla who has discovered the ability to transmigrate souls and sets off for Los Angeles (by freight train) in the hopes of gaining a new, normal body.
The story then shifts gears to pick up a plot strand from Marvel’s monthly Werewolf by Night title where Lissa Russell has joined a Satanic cult, The Brotherhood of Baal in the hopes of finding a cure for her werewolf brother. Lissa quits the cult after learning that they practice human sacrifice. The Brotherhood abducts Lissa and scrawl Manson-style graffiti on the walls of her home. This sends Jack Russell in search of his sister. He soon discovers that Danton Vayla (who resembles Anton LaVey in name as well as appearance) is the leader of the Brotherhood of Baal and about to sacrifice Lissa in the very ritual that the Monster’s soul is to transmigrate into the body of a handsome young cult member. One lengthy Werewolf-Monster scuffle later and Vayla lies dead, the cult is ruined and Lissa is freed. The Monster and Jack apparently plunge to their death when Vayla’s flaming Malibu beach-house plunges off a cliff into the ocean below.


TO CONTINUE READING THIS POST, PLEASE VISIT HERE.
Posted by William Patrick Maynard at 4:47 AM No comments: