Sax Rohmer’s Daughter of Fu Manchu was originally serialized as Fu Manchu’s Daughter in twelve weekly installments of Collier’s from March 8 to May 24, 1930. It was published in book form the following year by Cassell in the UK and Doubleday in the US. Rohmer divides the novel into four sections comprising three chapters each. This week we examine the fourth and final installment.

The novel’s finale gets underway at a breakneck pace. Sir Lionel Barton has retreated to Abbots Hold, his estate in the English countryside. Sir Denis Nayland Smith and Police Superintendant Weymouth are there to oversee Sir Lionel’s safety as well as that of his right hand man, Shan Greville and Sir Lionel’s niece (and Greville’s fiancée), Rima. Dr. Petrie and his wife, Kara are delayed while both Shan and Rima are ill-at-ease locked up in Sir Lionel’s ancient and mysterious home with his requisite menagerie of exotic wildlife (including his pet cheetah).

Rima is rattled by the legends that Abbots Hold is haunted and is convinced she has glimpsed a ghostly cowled figure the night before. Both she and Shan are troubled by the gypsies who have camped just on the border of the estate. Her uncle’s many oriental curios (such as the lacquer cabinet in the sitting room) are also weighing heavily on Rima. She tries losing herself in a book but is bothered by the musty smell of the house and resorts to spraying the room with perfume.

That night, Shan is unable to sleep convinced the tapping he hears is Morse code. Investigating, he spies the ghostly cowled figure of a monk from the East Tower signaling to a figure in Sir Lionel’s room. Attempting to intercept the figure, he stumbles upon Sir Denis who is forced to take him in his confidence. Smith reveals he disguised himself as the ghostly monk and that he was communicating with Weymouth via Morse code. Neither man trusted Sir Lionel or Greville because they had previously been hypnotized by Fah lo Suee and Smith believes Fu Manchu’s daughter has infiltrated Abbots Hold. Sir Denis startles Greville by stating that now Rima can no longer be trusted as well.

TO CONTINUE READING THIS ARTICLE, PLEASE VISIT THE BLACK GATE ON FRIDAY.
Posted by William Patrick Maynard at 8:38 PM No comments:

Sax Rohmer’s Daughter of Fu Manchu was originally serialized as Fu Manchu’s Daughter in twelve weekly installments of Collier’s from March 8 to May 24, 1930. It was published in book form the following year by Cassell in the UK and Doubleday in the US. Rohmer divides the novel into four sections comprising three chapters each. This week we examine the third part.

The section begins with Shan Greville’s delirious account of his and Sir Denis Nayland Smith’s foolhardy infiltration of a meeting of the Si-Fan’s Council of Seven while disguised as Mongolian monks. Sir Denis recognizes Ki-Ming among the attendees and fears the mandarin will likewise remember him if he gets a good look at his features beneath the monk’s cowl. Greville sees Madame Ingomar enter the room and recalls her true identity as Fah lo Suee, the daughter of Fu Manchu. Unable to understand the council’s conversation, the truth promptly reaches him when a gong sounds and the two Mongolian monks appear while all eyes turn upon Sir Denis and his companion.

Greville recovers consciousness to find himself in Chinese clothing in a foreign household. A Chinese surgeon attends him and denies any knowledge of Sir Denis or of a location known as el-Kharga. Greville collapses once more. When he recovers a second time, he is in the presence of Fah lo Suee who claims to be able to read his mind. She offers proof that she is aware of his love for Rima Barton. Greville is too weakened to realize he has been drugged and tricked into revealing information to his captor. He collapses again. Upon his next recovery, he finds Fah lo Suee speaking of her desire to rule Russia, the home of her mother and how, as a half-caste herself she is drawn to Greville. She speaks openly of how the Si-Fan is the New World Order that will unite the East under a single power and how she intends to be at the forefront of the New Wave that threatens to sweep the globe.

TO CONTINUE READING THIS ARTICLE, PLEASE VISIT THE BLACK GATE ON FRIDAY.
Posted by William Patrick Maynard at 6:01 PM No comments: 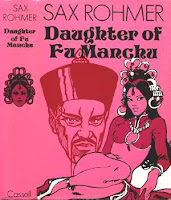 Sax Rohmer’s Daughter of Fu Manchu was originally serialized as Fu Manchu’s Daughter in twelve weekly installments of Collier’s from March 8 to May 24, 1930. It was published in book form the following year by Cassell in the UK and Doubleday in the US. Rohmer divides the novel into four sections comprising three chapters each. This week we examine the second part.

Rohmer slows his pace to take time to develop the character of Rima Barton at the outset of the second part. The reader begins to understand her as one of Rohmer’s typically strong female characters in contrast with the shrinking violets one is accustomed to in fiction of the day. The strained relationship between Rima and Shan Greville is revealed to be jealousy over his attraction to Madame Ingomar, the exotic foreign woman who had likewise stirred Sir Lionel’s passions.

The choice of Greville as narrator is refreshing and allows the reader to view Dr. Petrie’s resurrection of Sir Lionel from the dead with a genuine sense of wonder. The Arabs among the team at the dig view Barton’s revivification as black magic while Greville begins to appreciate the genius of Dr. Fu Manchu once he sees proof that Barton was not dead, but only subjected to a drug-induced cataleptic state until he was injected with the antidote.

TO CONTINUE READING THIS ARTICLE, PLEASE VISIT THE BLACK GATE ON FRIDAY.
Posted by William Patrick Maynard at 1:38 PM No comments: 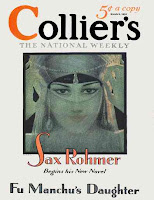 Sax Rohmer’s Daughter of Fu Manchu was originally serialized as Fu Manchu’s Daughter in twelve weekly installments of Collier’s from March 8 to May 24, 1930. It was published in book form the following year by Cassell in the UK and Doubleday in the US. Rohmer divides the novel into four sections comprising three chapters each. This week we examine the first part.

It had been over a dozen years since Rohmer had finished the Fu Manchu series. Since that time, both The Yellow Claw (1915) and his three Fu Manchu titles had been filmed by Stoll. In the late 1920s with the advent of sound, Paramount announced a new series of Fu Manchu films starring Warner Oland as the Devil Doctor. Collier’s was eager to capitalize on the character’s renewed popularity and the author signed a contract to revive the series.

His first attempt was to write a contemporary thriller involving American protagonists opposing a self-styled Emperor of Crime to be revealed at the story’s conclusion as Fu Manchu’s daughter. After several installments of the serialized adventure for Collier’s, Rohmer’s editor determined that the author had failed to capture the flavor of the original series and both parties reluctantly agreed to let him alter the story’s conclusion to remove all trace of Fu Manchu. The delayed serial, The Emperor of America resumed after a hiatus of several months in 1928 and published in book form the following year. A minor work, it is most notable for serving as the template for the Sumuru series, another ersatz Fu Manchu, many years later.

TO CONTINUE READING THIS ARTICLE, PLEASE VISIT THE BLACK GATE ON FRIDAY.
Posted by William Patrick Maynard at 8:14 AM No comments:

Regular readers of my articles will be aware of my fascination with the works of British thriller writer, Sax Rohmer. Along with penning several series of articles, I was fortunate enough to be authorized by Rohmer’s Estate to write two new Fu Manchu thrillers for Black Coat Press in an effort to bring new readers back to the originals. For several decades Rohmer’s work has been largely out of print and much of it has fallen into obscurity. Happily, this has recently started to change.

Last year, Titan Books licensed Rohmer’s catalog and began an ambitious reprint series at the start of this year beginning with Rohmer’s fourteen Fu Manchu titles. All of the books are being printed in affordable trade paperback editions. The first three titles are available at present and the next two may be pre-ordered from Amazon. These attractive uniform editions recall the lurid retro cover art on Penguin’s recent trade paperback editions of Ian Fleming’s fourteen James Bond thrillers.

Of course, while the Devil Doctor may have been Rohmer’s most famous work, it doesn’t even come close to scraping the surface of this prolific author’s voluminous output. While Titan is committed to bringing his many novels back into print, Rohmer has several dozen uncollected stories that were published exclusively in magazines and newspapers in the first half of the last century. Tom Roberts’ Black Dog Books have made an indelible mark by launching their Sax Rohmer Library series. Rohmer scholar Gene Christie has begun compiling several collections of rare early material much of which is otherwise unavailable and would have likely remained lost without his efforts.

TO CONTINUE READING THIS ARTICLE, PLEASE VISIT THE BLACK GATE ON AUGUST 3.
Posted by William Patrick Maynard at 9:31 PM No comments: