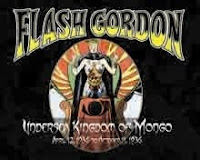 “The Undersea Kingdom of Mongo“ was the seventh installment of Alex Raymond’s Flash Gordon Sunday comic strip serial for King Features Syndicate. Originally printed between April 12 and October 11, 1936, “The Undersea Kingdom of Mongo” picks up the storyline where the sixth installment, “At War with Ming” left off with Flash, Dale, and Zarkov’s rocketship eluding Ming’s air fleet in the heavy fog known as the Sea of Mystery.

A magneto-ray from the ocean brings the rocketship down, our heroes bail out, but only Zarkov and Dale come ashore on an island with Flash presumed drowned at sea. In fact, the magneto-ray has brought the unconscious Flash below the ocean to the undersea kingdom of Coralia where Queen Undina takes an immediate fancy to Flash.
Undina is the latest in Alex Raymond’s line of femme fatales. It seems that while Mongo has honorable males to offset the many villainous fiends and monstrous creatures, the females of Mongo are all scheming nymphomaniacs.

Queen Undina has her chief scientist Triton subject Flash to the lung machine which converts him into a water-breather like her people. Consequently, he is now unable to survive on land. 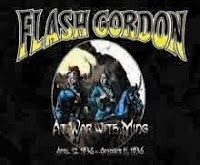 “At War with Ming“ was the sixth installment of Alex Raymond’s Flash Gordon Sunday comic strip serial for King Features Syndicate. Originally printed between October 20, 1935 and April 5, 1936, “At War with Ming” picks up the storyline where the fifth installment, “The Witch Queen of Mongo” left off with Flash awaiting Ming’s recognition of Kira, the cavern kingdom he had conquered over the course of the last two installments as an official kingdom of Mongo.

Unsurprisingly, Ming rejects Flash’s claims that Azura has abdicated as valid and demands that she be vanquished before he will recognize Flash as a legitimate monarch. Sadly, just as in the real life it is a petty disagreement that is interpreted as justifiable cause for war.

Flash immediately declares war on Ming in response to the insult he received. Flash and Dale head the Black Lancers, while the Hawkman Khan heads the infantry and Dr. Zarkov heads Azura’s artillery unit. The first strip ends with Kira’s forces mobilizing for war despite being hopelessly outnumbered.

For the next five and a half months, readers thrilled to Alex Raymond’s glorious depictions of battle. It seems strange, from the vantage point of the 21st Century, to see that the attitude that a war fought over wounded egos was still considered glorious after the tragic and monumental loss of life during the First World War less than twenty years before.

TO CONTINUE READING THIS POST, PLEASE VISIT HERE.
Posted by William Patrick Maynard at 10:06 AM No comments:

This wasn’t the article I planned on posting this week. Those that know me are aware of my obsession with Blake Edwards’ work. It is also true to say that I am obsessive about the work of Hammett, Chandler, Ross Macdonald, Sax Rohmer, Ray Davies, and countless other writers. However, my love of writers and writing begins and ends with Mr. Edwards.

Blake Edwards’ passing this week brings his work back into focus again for the public at large. He was a prolific writer/producer/director with a body of work that spanned nearly eight decades and ran the gamut from film, radio, television, and theater. A native Oklahoman, the stepfather who adopted him made him the third part of a family that now boasts five generations in the entertainment industry.

His early success came in radio creating the hardboiled detective series, Richard Diamond, Private Detective which later made a successful transition to television and led Edwards to produce his own television variation in the form of the classic Peter Gunn. The latter project began an association with composer Henry Mancini that continued for over 35 years until Mancini’s death.

Edwards’ successful transition from radio to television ran concurrent with his consistent work in film, largely as the writing partner of director Richard Quine. Edwards served as Quine’s second unit director which led to his own opportunity to move into directing feature films in the mid-1950s.

TO CONTINUE READING THIS POST, PLEASE VISIT HERE.
Posted by William Patrick Maynard at 6:20 AM No comments: 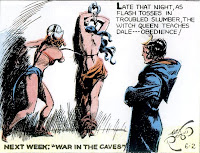 “The Witch Queen of Mongo“ was the fifth installment of Alex Raymond’s Flash Gordon Sunday comic strip serial for King Features Syndicate. Originally printed between April 21 and October 13, 1935, “The Witch Queen of Mongo” picked up the storyline where the fourth installment, “Caverns of Mongo” left off with Flash and Dale setting out to conquer the cave kingdom that was awarded to Flash following the tourney held by Ming and Vultan.

Writer/artist Alex Raymond benefitted greatly from the contributions of ghost writer Don Moore who developed characterization to bring much-needed balance to the nonstop parade of cliffhangers. The serial quickly sets the tone with Dale’s mounting frustration with Flash’s preference for continued adventures over settling down and marrying her. This development coincides with the introduction of Azura, the titular Witch Queen of the Kingdom of Syk.

Azura is the second of Alex Raymond’s stunning exotic women of Mongo and rivals Aura in complexity and appeal. The Witch Queen’s descent from the heavens on a stair of flames is an iconic image that may have influenced Frank Frazetta’s cover art for Conan the Freebooter three decades later. Likewise, Flash’s Nordic-style horned helmet suggests the strip was a vital inspiration on the depiction of Robert E. Howard’s barbarian pulp hero.

From the very start, the point is made that the Witch Queen’s “magic” is nothing more than advanced technology. The continued juxtaposition of the futuristic with medieval fantasy remained a potent formula for success with the stip.

TO CONTINUE READING THIS POST, PLEASE VISIT HERE.
Posted by William Patrick Maynard at 10:14 AM No comments:

Dr. Anton Phibes is the mad genius played by Vincent Price in two cult classic films for American International Pictures in the early seventies. Director Robert Fuest imbued both The Abominable Dr. Phibes (1971) and Dr. Phibes Rises Again (1972) with a surprising degree of style and wit that set them apart from virtually all other genre films of their era.

The creation of screenwriters James Whiton and William Goldstein, Phibes was portrayed in their original screenplay, The Curses of Dr. Pibe (not a typo on my part, the character’s surname was subsequently altered) in a much more serious vein. Their intended film was both dramatic and horrific and much more in keeping with the tone of horror films of the early 1970s. It is a far cry from the blackly-humored, deliberately anachronistic 1920s period piece resplendent in Art Deco designs that Fuest delivered to AIP.

Dr. Phibes is said to hold doctorates in both music and bio-physics. Phibes is an acclaimed organist and composer and, in private, an eccentric and reclusive inventor. He is hopelessly devoted to his beautiful young wife, Victoria (played in both films by the lovely Caroline Munro) who dies on an operating table following a car crash that leaves her husband horribly disfigured with a literal death’s head in place of a face.

Victoria’s death drives Phibes insane. He allows the world to think him dead and sets out to exact revenge on the surgical team he holds accountable for her death. He employs the G’tach, the Biblical seven curses of Egypt as his means of assassinating each member of the surgical team. The murders are investigated by a hapless Scotland Yard detective, Inspector Trout (wonderfully underplayed by Peter Jeffrey).

TO CONTINUE READING THIS ARTICLE, PLEASE VISIT HERE.
Posted by William Patrick Maynard at 11:16 AM No comments: