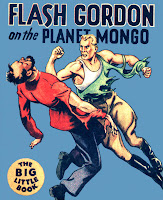 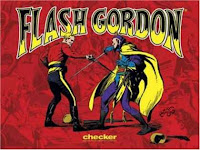 The strip kicked off with an exciting documentary-style depiction of an unforeseen catastrophe assailing our world. An unknown planet mysteriously appears in our solar system and is hurtling rapidly toward Earth. Destruction seems unavoidable. We are quickly introduced to a scientist, Dr. Hans Zarkov who is rapidly completing a rocket ship which he plans to man on a suicide mission to try and divert the oncoming planet from Earth’s trajectory.

“Flash” Gordon is a Yale-educated world-renowned polo player (I’m sure we can all name a handful of world-renowned polo players). He and a young woman named Dale Arden are the only known survivors of a plane struck down by a meteor heralding from the approaching planet. Flash and Dale parachute just outside of Dr. Zarkov’s observatory. Paranoid from overwork, Zarkov pulls a gun on the startled plane crash survivors and forces them to accompany him on his suicide mission to space. The first installment ends with Zarkov’s rocket ship on a collision course with the rapidly hurtling planet.

The following week saw Zarkov lose his nerve and attempt to strangle Flash (who now believes their suicide mission is Earth’s only hope). Flash easily overpowers Zarkov while the rocket ship crashes into a mountain not far from a futuristic city. Flash survives, Dale is unconscious, and the reader presumes Zarkov is dead as a dinosaur menaces Flash and Dale as our hero first sets foot on alien soil.

Week Three saw the timely arrival of a second dinosaur to inadvertently save Flash and Dale. A rocket ship arrives from the futuristic city. Flash and Dale are captured by what appear to be Asians who take them to the city where they meet the unnamed Emperor of the Universe (a blatant Fu Manchu clone) who decides to marry Dale and sends Flash to the arena where he is to battle the Neanderthal-like “Red Monkey Men of Mongo.” This first use of the name Mongo makes it unclear that this is the name of the planet as opposed to a continent. The city is a nice mix of anachronisms with futuristic gadgetry existing alongside Roman-style decadence.

To Continue Reading This Article, Please Visit HERE
Posted by William Patrick Maynard at 2:55 AM No comments:

Dracula’s Daughter: From Script to Screen 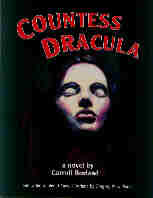 The success of Universal’s Dracula (1931) starring Bela Lugosi made not only a cycle of similar horror films inevitable, it virtually demanded the studio turn their attention to a direct sequel.

As had happened with Lon Chaney in the silent era, MGM was quick to top Universal at its own game. They secured the services of Lugosi and director Tod Browning for a remake of Chaney’s silent classic, London After Midnight (1927). Browning had directed that notorious lost classic and having Lugosi fill Chaney’s shoes as the faux vampire seemed an inspired choice.

Browning’s remake, Mark of the Vampire would wing its way to theaters in 1935. Joining Lugosi’s Count Mora was Carroll Borland as his incestuous daughter, Luna. Borland was heavily featured in publicity photos with Lugosi despite not having much of an acting career (the following year she was reduced to a bit part in the first of Buster Crabbe’s Flash Gordon serials for Universal), but her portrayal of Luna was enormously influential on the cinematic female vampires who followed.

Borland contributed more than just the definitive screen depiction of a female vampire, however. Several years before Mark of the Vampire was born, she began a longstanding (and allegedly unconsummated) relationship with Bela Lugosi. She remained obsessed with the actor long after his death and had written a lengthy treatment for a Dracula sequel to star both of them entitled Countess Dracula.

Philip J. Riley published the final version of the treatment (which Borland tinkered with for decades) as part of his MagicImage FilmBooks series dedicated to Universal Horrors. Lugosi tried and failed to have the treatment produced on stage or on screen as a legitimate sequel. It remains Borland’s only writing credit and was published just after the former actress’ death in 1994.

To Continue Reading This Post, Please Visit HERE.
Posted by William Patrick Maynard at 6:15 AM No comments: 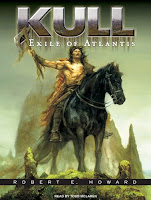 “Beyond the Sunrise” is the unofficial title afforded an unfinished Kull story that did not see print until over forty years after the author’s death. Its significance is due largely to the fact that it was the first of four widely differing attempts to continue the Kull series following the publication of both “The Shadow Kingdom” and “The Mirrors of Tuzun Thune” in Weird Tales in 1929.

Robert E. Howard starts the story off with a bored Kull sitting on his throne listening to a rather dull tale of the Valusian noblewoman, Lala-ah who has run off with her foreign lover leaving the nobleman she was promised to waiting at the altar. The barbarian king’s pride is piqued once he learns the foreigner insulted him behind his back. He then readily agrees to lead a posse to retrieve the noblewoman and restore his and his nation’s honor.

I was about as enthusiastic as Kull when I first started the story and thought the Atlantean was acting like a childish oaf for getting his nose out of joint just because a foreigner called him a sissy when he wasn’t around to defend himself.

Even with the weakest Robert E. Howard stories, the imagery he employs in crafting the tale redeems any failings. Howard waxes eloquent when Kull and his men visit neighboring kingdoms and the king stands upon a mountaintop overlooking the valley below and ponders the difference of the topography from his native Atlantis. Kull draws parallels on how the lay of the land is reflective of the endurance of its people.

Howard continues this introspective spell in having the king measure himself against the commander of his troops. Surprisingly, Howard has his hero find his own character lacking in a strict departure from the norms of the heroic genre. Kull subsequently reflects on the unfairness that his commander can rise no higher in the ranks because he is of foreign birth. Kull, himself a barbarian usurper to the throne, is also a foreigner and an illegitimate monarch to boot.

That Howard has drawn a deliberate parallel with the inequality of arranged marriages in the plight of the fugitive Lala-ah to the inequality of the rules limiting his commander’s station is beyond Kull’s understanding, but certainly not the reader.

TO CONTINUE READING THIS POST, PLEASE VISIT HERE.
Posted by William Patrick Maynard at 7:40 AM No comments:

Most literary criticism of Bram Stoker’s Dracula is limited to treating the work as one of the more blatant examples of Victorian sexual repression. A few more adventurous critics are eager to play Freudian detective and speculate what the book reveals about the author’s possible sexual feelings for Sir Henry Irving or his alleged serial infidelity with East End prostitutes.

Rare is the literary critic who looks at the recurring theme throughout the book of the difficulty modern man faces in accepting the supernatural as reality.

From its first page to its last, this is what Stoker is most interested in shaping his story around. The book has become so ingrained in our culture that millions who have never read it have absorbed the gist of the plot from the past century of adaptations, rip-off’s, and parodies in film, television, theater, and books.

This is part of the reason why the concept is missed, but the greater reason is the one Stoker illustrates time and again in his book – we deliberately ignore what we can’t comfortably explain.

Stoker’s Dracula is a very modern novel. The author delights in presenting the latest gadgetry, scientific theory, and medical advancement (several of them were only in their pioneering stage at the time of publication) in sharp contrast with the Old World’s superstition which threatens to overwhelm the modern world’s fragile constructs at every turn of the page.

The story is initially told through the eyes of Jonathan Harker, a fine upstanding Anglican solicitor with a solid career path and a fiancée waiting to marry him once he returns home from his visit to Transylvania to conclude a real estate transaction with an Old World nobleman.

Harker’s journey is one he initially delights in as a superior modern Englishman. He has an eye for detail and loves the simple life of the European peasants who appear to have been forgotten by time. He only becomes at ill at ease when their Catholic iconography and belief in Satan as a tangible force of evil upsets his worldview.

TO CONTINUE READING THIS POST, PLEASE VISIT HERE
Posted by William Patrick Maynard at 5:49 AM No comments: